Formal shortlist due to be drawn up next month

Six firms are being sounded out about the scheme to redevelop the IBM building on London’s South Bank.

AHMM’s original proposals for the office complex, completed in 1983, were floated in early 2020 and envisaged the creation of an extra 20,000sq m of space through the addition of two new storeys.

But the scheme for Wolfe Commercial Properties Southbank – owned by the United Arab Emirates-based Easa Saleh Al Gurg Group – was drawn up before the building was given a grade II listing later that year, in part for its “architectural concordance” with the neighbouring National Theatre, also designed by IBM architect Denys Lasdun. 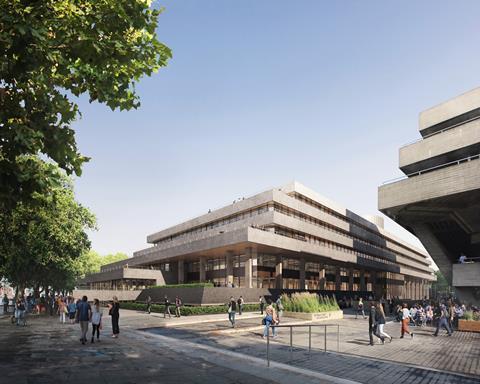 AHMM’s revised proposals, approved last summer, cut the amount of new space down to 11,000 sq m, which Wolfe said will “sensitively restore and upgrade the building”.

Stanhope is development manager on the project and is understood to be still deciding whether to let the job as a design and build contract or a construction management deal.

But Building understands it has been speaking to Mace, Sir Robert McAlpine and Lendlease about the deal which has a price tag of £120m, down from the £150m-plus cost first envisaged for the original, larger scheme. The others running the rule over the job are Multiplex, Skanska and Laing O’Rourke.

Stanhope is next month expected to pick three or four firms to work up bids with a winner due in the spring. 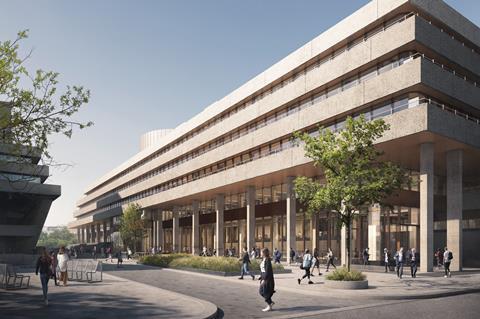 How AHMM’s proposals for scheme look

Three firms, Keltbray, Careys and Morrisroe, are chasing the £20m enabling works package which will kick off the redevelopment when IBM moves its remaining staff out of the building in the summer.

Consultants working on the scheme include QS Exigere, Heyne Tillett Steel as structural engineer and Watkins Payne as M&E engineer.

IBM is swapping the Brutalist landmark for new offices at the nearby Shell Centre with a return to its long-standing home believed to be still up in the air.

The building, which is the firm’s European headquarters and which sits between ITV’s London home and the National Theatre, was once owned by Alan Sugar, whose real estate arm Amsprop sold it to Saudi investors nearly nine years ago in a deal understood to be worth around £120m.