Contractor to start on £135m deal later this month

Skanska has won a £135m deal to overhaul the former base of media group Thomson Reuters in Canary Wharf.

McGee has been on site since last year carrying out demolition and enabling and structural strengthening works to the steel frame building at 30 South Colonnade. 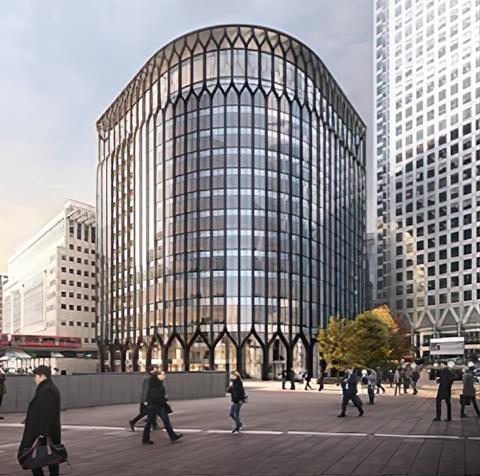 Skanska, which is also redeveloping Blossom Street on the City fringe for British Land under a £180m deal, will move on to site later this month for developer Quadrant, which acquired the building in May 2019, and its joint venture partner, US investor Oaktree.

The existing 13-storey building, which opened in 1991, was designed by KPF and underwent a Perkins + Will-designed makeover in 2010 ahead of Reuters taking up the space. But Reuters has now taken out a lease at 5 Canada Square, elsewhere in Canary Wharf.

Under the plan for 30 South Colonnade, two floors will be removed to make an 11-storey building with a new reception also built. Architect on the redevelopment is Buckley Gray Yeoman.

Skanska will also carry out M&E work at the site, called YY London, and which is due to be completed in the final quarter of next year.

Skanska’s recent wins in the past few months include a £72m deal to overhaul an office block at a site once used as General Eisenhower’s Allied headquarters during the Second World War.

Norfolk House in Westminster was first built in 1722 but was demolished in 1938 with a new building put in its place the year after.

And last month the firm won a £507m scheme to dual 16km of the A428 between St Neots and Caxton Gibbet in eastern England for Highways England.