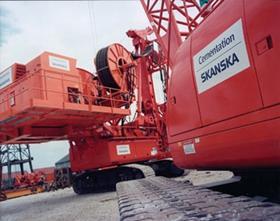 New infrastructure contracts and a strong order book in 2014 have lifted profit at Skanska UK by 6% to £40.1m.

Turnover at the UK subisdiary of the Nordic construction giant grew 22% in the past year to £1.3bn, with a profit margin of 3%.

Skanska announced that new orders in 2014 totalled £1.7bn,, with recent wins including a contract to upgrade Junction 30 of the M25 the Highways Agency’s £5 billion Collaborative Delivery Framework contract for the improvement of England’s motorways and major A roads.

The firm has also started work on the MoD’s £250m Defence College at Worthy Down in Hampshire and the £49.9m North West Cambridge development.

UK president and chief executive Mike Putnam said: “Our financial results throughout the recession have remained consistent, stable and at a good level.”

In 2014 Skanska announced new orders totalling £1.7bn. Putnam added: “We have a robust pipeline of work, and in addition have been named preferred bidder on a considerable number of other projects. This puts us in a strong position going forward.”