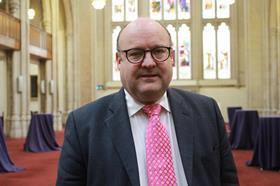 The City of London’s planning boss has said the number of smaller businesses moving into the area will force developers to change the layouts of their schemes, as he shrugged off worries the Square Mile might be hit by a post-Brexit exodus.

Following the Brexit vote in 2016, there had been a major increase in the number of SMEs taking up office space in the Square Mile, with companies of less than 500 employees making up more than 95% of occupiers, Christopher Hayward (pictured) said.

Hayward said the City was no longer the preserve of professional and finance services firms, with industries such as media and technology moving in as well.

Last December, 22 Bishopsgate developer Peter Rogers told Building his firm, Lipton Rogers, was being contacted by IT firms about taking up space at the 278m tower which is being built by Multiplex.

“There are some interesting firms looking at coming down from [IT hotspot] Old Street,” he said.

Hayward said his team is telling developers to provide more flexible office space to take into account the sizes of the firms eyeing a move into the City.

He said: “We are getting lots of people [developers] coming to talk to us about lots of schemes and what we are saying to them all is that they need to be aware of the changing occupier base.”

He said towers would continue to be a feature of the City but floorplates was the most obvious way office layouts were having to change.

“Being the Square Mile, we can’t build out we can only build up. What is changing is the adaptability of floorplates.

“Increasingly small companies will take up a part of a floorplate or a single floorplate but they won’t take up multiple floorplates or indeed a whole building.

“So what you are getting is the towers are still there but they are housing considerably more companies than they would have done historically.”

He added that the decision by German firm Deutsche Bank to take up 469,000 sq ft space at 21 Moorfields was a vote of confidence in the City.

Given planning last month, the Wilkinson Eyre-designed building will be built above Moorgate’s underground station.

Hayward added: “There was a moment when the Brexit vote was taken where there was mass panic in the City that we were going to lose millions of jobs. We haven’t lost millions of jobs and I don’t think we will.”

Landsec is developer on the 21 Moorfields scheme where Mace is currently overseeing steel decking work which sits above the concrete slab above the station. It is due to be completed in 2021.

Research released by the City of London ahead of next week’s Mipim property show at Cannes in the south of France revealed the depth of confidence in the capital.

It said 58% of the firms surveyed felt London was the best European city for businesses, almost three times as many who felt Dublin was the top pick (22%).

The talent on offer in London was revealed to be one of the big drawcards for the surveyed companies, with 89% labelling it the European city with the best talent pool for financial services.