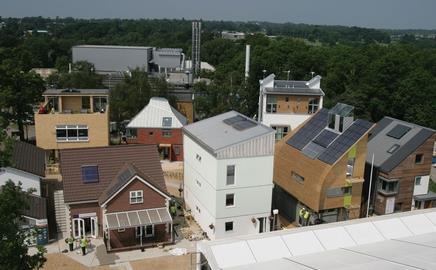 The UK’s first net zero-carbon home was revealed this week at the launch of BRE’s Offsite2007 event at its headquarters in Watford, Hertfordshire.

The home, designed and built by a team including Sheppard Robson, Kingspan Off-Site and Arup, will generate heat and power from integrated photovoltaic panels, a solar thermal array and a biomass boiler.

Other features include water efficiency techniques and passive cooling and ventilation.

Yvette Cooper, the housing minister, was present to view the home, the first to meet the highest level of the communities department’s Code for Sustainable Homes, level six.

Cooper said: “Many of the technologies exist already, as these homes show. Now we need more work to test them and deliver economies of scale.”

Many of the technologies exist already, as these homes show

Offsite 2007 is intended as a showcase for the latest modern methods of construction and sustainable technologies. The seven buildings unveiled at the event also include a home, designed by PRP Architects and built by Stewart Milne, that meets level five of the code, and a carbon-neutral school by

Re-Thinking, the consultancy arm of Willmott Dixon. The school was made from recycled timber and achieves the BREEAM “excellent” standard for schools.

Meanwhile, BRE announced this week that it will build a visitor centre at its headquarters to help fund an expansion programme.

A BRE spokesperson said the visitor centre would use the structure of a building already on the site. Two architects are battling to design the £500,000 centre, which will be funded by the East of England Development Agency. Work will start on site in July.