23
Specialist Contractor of the Year
News

Specialist Contractor of the Year 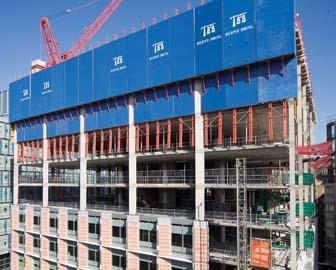 Concrete is one of the branches of the industry that has been transformed in the past 10 years. The brute force approach to getting a building up has been superseded by well managed, technologically sophisticated firms that have used this ancient material to produce work of almost balletic grace. Byrne Brothers is one of the firms that has effected this change. To take the well managed bit first: Byrne wins 19 out of 20 jobs from a repeat client, it invests the equivalent of 1% of the national NVQ budget in training and has pocketed a RoSPA gold award for its safety practices. Byrne's technology is demonstrated by its work on the O2 dome, where, without the aid of a tower crane, it slipformed eight reinforced cores to support the roof, or its concrete frame for the Diamond Synchrotron in Oxford, a kind of super microscope the size of five football pitches, for which Byrne had work to 5mm tolerances.

It’s hard enough simply to grow in your market; it’s even harder to do the same in a market that you enter; and harder still to do so while taking on the latest, still experimental techniques. But that is what Swift Horsman has done. It started out as a joiner back in 1971, then turned itself into a fit-out contractor before deciding a few years back to embrace off-site manufacturing. This strategy was thoroughly tested at immense projects, such as Heathrow Terminal 5, and extremely tricky ones, such as the Kings Place music venue by King’s Cross in London. Here, the quality of the firm’s design and construction was ruthlessly tested by the musicians, and it was not found wanting.

Tricky business the making and installing of facades. So tricky that a number of firms have struggled, and even gone under. Not Alumet, though. Alumet has doubled its turnover in the past three years. This is partly because of the quality of its work (of course) and partly because of the quality of its working relationships. Taylor Woodrow, Miller, HBG and Kier have all made it a strategic partner. And it has shown it can tackle sensitive projects, such as the refitting of social housing in Sandwell occupied by elderly residents.

Solar shading sounds as though it is a recent discipline, the product of the move to prestigious glass buildings in the last century. So it may come as a surprise to discover that Levolux has been in business for 160 years, and as you might expect it has learned a thing or two. Actually, it’s still learning, as shown by innovations introduced in the past year such as the its universal curtain walling bracket with thermal and acoustic breaks. This impression of experience and open mindedness is confirmed by jobs that Levolux has worked on, including the Emirates stadium and Gatwick airport. It even worked on Wembley and survived …

This cladding outfit has shown just what can be done with the partnering concept. Nine out of 10 jobs are for repeat clients, and it has formed long-term relationships with its key suppliers, overseen by a dedicated supply-chain manager. The key to making this approach work is maintaining customer satisfaction. To do this, the firm collects as much information as it can from its employers, collates it, then studies the big picture for any sign of weakness in its service. It also puts the results up on staff noticeboards to let employees see how the company is performing.

This asbestos contractor has achieved the most remarkable financial success of any of the firms shortlisted in this category: a profit growth of 1,800% over the past three years. It even managed to pull off a successful listing on the alternative investment market a couple of years ago. The commercial dynamism of the company is based on its technical expertise, which is a pretty non-negotiable skill for asbestos removal, and the sheer width of its client base, which includes more and more partnering and framework arrangements.