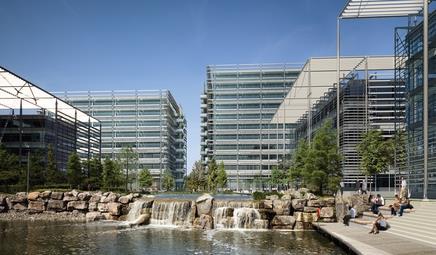 Stanhope is to pioneer the use of a steel composite building system which it hopes will cut construction time by up to a third, writes Stephen Kennett.

The developer is planning to use the lightweight system, which combines steel with polyurethane, in place of conventional concrete floors and risers on the next office it builds at its Chiswick Park development in west London (pictured).

Peter Rogers, Stanhope’s director, described the system, known as sandwich plate, as “just like Meccano”. It was developed by Intelligent Engineering for maritime and civil engineering projects, although it has been used on stadiums and on remedial work at Ascot racecourse.

Stanhope and Arup, its engineering partner, plan to use the Chiswick Park project to compare the system’s performance to traditional steel and concrete construction.

Rogers said: “It’s a bit more expensive than traditional construction, but costs are now close enough to make it work on economic grounds. We’ve always had competition between steel and concrete, but this adds another element into that mix.”

The system uses two metal plates bonded to a solid polyurethane core. They are used for the floor units and are 70% lighter than post-tensioned concrete.

The panels are delivered to site already assembled and the floors are ready and safe to use as soon as they are secured in position, doing away with the need for wet trades.

A previous study commissioned by Stanhope showed that using the sandwich plate system reduced the time taken to build a building’s superstructure by between 20% and 35%.

Arup estimates it will enable 80% of the building process to be taken off site, which will reduce costs, save time and improve efficiency.

Rogers said: “If we can get this to work we will have the ultimate modular set of components.”

No date has been revealed yet for when the construction will start. Rogers said it would depend on the market conditions, but that he is hoping to begin sometime next year.