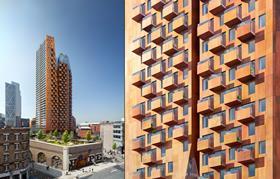 Perkins + Will has appointed a former Structure Tone boss to head up its business development arm.

Jonathan Ross joins from the US contractor with a brief to grow its corporate interiors arm alongside its overall architecture business.

Ross was in charge of Structure Tone’s marketing team in London for seven years.

Perkins + Will, which is owned by Lebanese consultant Dar, has designed a new 185,000 sq ft mixed-used scheme on a site at 150 Holborn next door to the grade II* listed Victorian gothic Prudential building.

It will be Dar’s new headquarters in London and will be built by McLaren Construction with work on site starting at the end of this year. Perkins + Will move into the new building once it is finished in 2020.

Perkins + Will is currently working on The Stage (pictured), a mixed-use residential project in Shoreditch which incorporates one of the oldest Shakespearian playhouses.