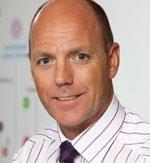 Speaking after the company announced results for the half-year to 30 June 2010, McKeever said turning around a business during a recession was a tough ask but he was satisfied with
the progress.

He said: “2009 was all about refinancing the business, 2010 is about returning to a profit and next year will be about growing our market share.”

The Altrincham-based company ran into trouble shortly before McKeever took over the top job in June 2008. After two profit warnings in five weeks and a failed management buyout, it was forced into a refinancing deal that cleared its £17m debt pile and saw banker RBS take a stake of just under 20% in the business.

In the first six months of this year the company made a pre-tax loss of £900,000 but McKeever said the firm would return to a profit for the whole year.

He said: “Our order book is 10% ahead of this time last year and our order intake in June was the strongest for two years.”

Despite the optimism, he said the retail fit-out market was still a tough sector and turnover for the six months fell 46% from £74.8m to £40.2m.

In an effort to combat the retail decline, the company will step up its push into the office and banking markets, particularly in London, and aims to produce half its turnover in the sector, McKeever said.

Six months to 30 June in numbers