Sunderland council on the hunt for Carillion replacement 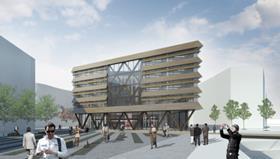 The Vaux building, which was being built by Carillion

Sunderland City Council has confirmed it is retendering a commercial project, which has been stalled since Carillion’s collapse.

Tenders have been released to secure a new contractor for the Feilden Clegg Bradley Studios-designed office block in the city, where work has been suspended since Carillion, who was the main contractor on the job, went bust in January.

The Vaux scheme, on the site of a former brewery, is one of a number of regeneration projects in the pipeline for the city as part of its Siglion regeneration joint venture with Carillion and Igloo.

The council and Siglion have completed legal formalities and Carillion’s construction contract is now officially terminated.

The tender process with other contractors has now begun with tenders due to be returned on the project in mid-April.

Council leader Harry Trueman said there had been a lot of work to get new tenders drafted as soon as possible.

He said: “Though the news of Carillion’s collapse was a set-back, this has only served to galvanise the city in its determination to deliver job creating development at Vaux.”

The council bought the site from supermarket chain Tesco in 2011.