A key railway station used by Tottenham Hotspur fans on matchdays is set to revamped by Vinci-owned Taylor Woodrow.

White Hart Lane station will be rebuilt to include a new ticket hall and station entrance as well step-free access from street to platform.

The north London football club is set to move into its new 61,000 capacity stadium – currently being built by Mace – at its White Hart Lane site next August and will play its home matches this coming season at Wembley stadium while work is completed.

The club had hoped the work at the nearby station would be ready in time for its move next year but the scheme for Transport for London is not due to start until this autumn and be completed in spring 2019.

Taywood will also be improving the public realm of the station to ease congestion when Spurs play.

TfL director for London Rail Jon Fox said: “The new entrance will provide better connections with the local area, supporting the new homes and jobs being created in Tottenham.”

Architect on the work is Landolt & Brown which is behind the revamp of another railway station in the area – Bruce Grove Station on Tottenham High Road. 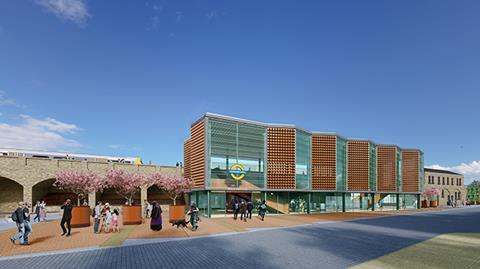 The new station will be ready by spring 2019