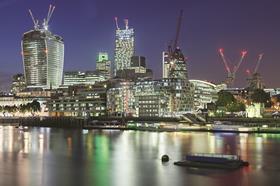 Tender price inflation is to slow in 2016 after two years of steep increases which have left inflation 18-20% higher than at the end of 2013, according to a Building survey of the country’s top cost managment consultants.

The data was gathered by interviewing eight of the UK’s top cost consultants (see table, right).

The steep inflation rises are “a pattern that has probably peaked,” Simon Rawlinson, head of strategic research and insight at Arcadis, said, adding that “activity data is not quite as strong as sentiment would have described it last year - it was no busier than it was the year before”.This view is backed by Savills’ latest commercial development index for December, which shows activity rose at its slowest rate for almost three years (see story, here).

Gardiner & Theobald partner Gavin Murgatroyd also predicted weaker project pipelines for 2017/18. He said: “Over the last couple of years there has been no correlation between what things cost and what people are charging”.

James Clark, partner at Core Five, said: “Contractors have capacity to fill in 2017.” However, supply continues to outstrip demand and this imbalance makes it ever more likely that there could be “new entrants” in the market, according to Aecom director Brian Smith.

For the time being the imbalance, which looks set to continue for 2016 and into 2017, means contractors are being more selective about choosing jobs, according to Paul Connolly, managing director for cost management at Turner & Townsend

He said that “it’s becoming increasingly difficult to get contractors to bid for work in competition”.

Other consultants are also noticing a shift away from two-stage procurement and Murgatroyd added that “heat is being taken out of the pricing because people are getting back to cost pricing”.

Rawlinson said there is a lot of “post-tender negotiation around projects that are costing too much and that they are not starting as promptly as they should”. He believes this will drive contractors to be more realistic and competitive in their pricing than they were in 2015 as they “need to make sure projects start on site”.

Duncan Green, managing partner at Pick Everard, believes the gap between budgets and costs is going to increase as costs are predicted to go up between 2.5-4% and thinks it’s “highly unlikely we’re going to see a matched increase in budgets to enable delivery to happen as it has in 2015”.

London is still the dominant driving force of tender price inflation in the UK, but is also considered more “volatile” and likely to remain so in 2016 by most consultants, including Alinea partner Mark Lacey.

Connolly advised that clients should therefore be “prepared for the unexpected because the market is overheating in the capital”.

He also said he was concerned there could be a “glut” of housing on the horizon, which could dampen sales prices and weaken demand for future residential developments. And as Lacey pointed out, price movement in London and the South-east is “still largely residential scheme driven”.