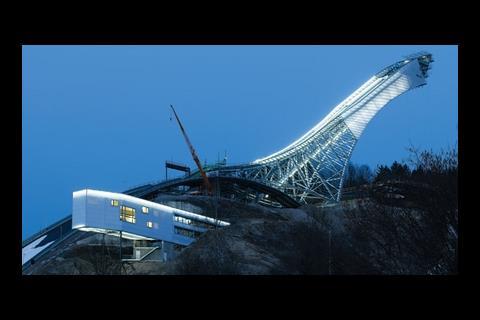 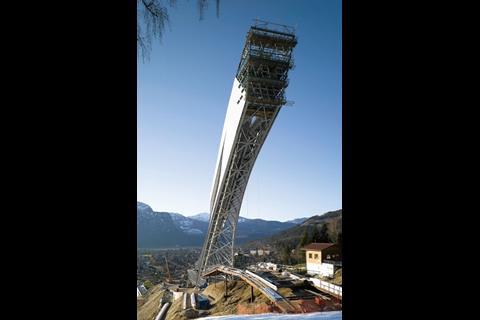 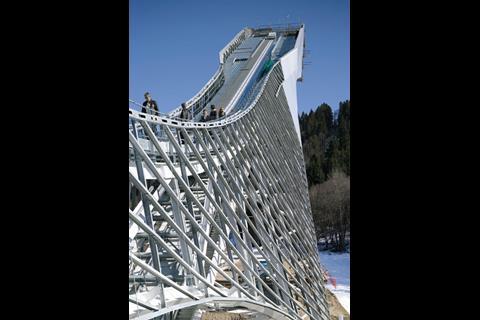 The hurtling, cantilvered form of this 395m German ski jump expresses the dynamic, gravity-defying sport of ski jumping itself

From some angles, it looks like the Eiffel Tower in the act of collapsing. From others, it evokes Concorde taking off from the runway. Despite which, it’s actually a stable, static structure built as an Olympic ski jump in the German ski resort of Garmisch-Partenkirchen.

The alarming, gravity-defying effect has been created by cantilevering the 395m steel tower at the 35 degree angle of the ski jumpers’ descent slope. The whole 750 tonne steel structure is triangulated – also like the Eiffel Tower – and has no vertical supports.

The extraordinary design by architect Terrain and structural engineer Mayr & Ludescher, both of Munich, won an architectural competition that attracted entries by Zaha Hadid, Behnisch Architects and Auer & Weber. It replaces an earlier ski jump that failed to match the technical standards new required.

As Terrain explains, the sculptural cantilevered form expresses the dynamic, gravity-defying sport of ski jumping itself. At the same time, its undulating contours echo the rounded forms of the surrounding mountains and valleys.

The tower is partly clad in white polycarbonate sheeting, which blends with the snowy winter landscape, and when it’s lit up at night, it glows like a beacon.

The £83m scheme includes a two-storey building containing viewing galleries, service area and a restaurant. That has a more stable horizontal appearance – in stark contrast to its dynamic cantilevered neighbour.