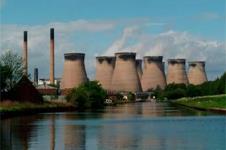 An injunction is being sought against a worker under the Prevention of Terrorism Act.

Scottish and Southern Energy has applied for an injunction against Steve Acheson in a bid to stop him from protesting at Fiddlers Ferry power station in Cheshire, after he was dismissed from the project.

Acheson was one of more than 3000 workers whose name appeared on the illegal blacklist that being used by over 40 major construction firms and that was uncovered by the Information Commissioner's Office earlier this year.

This injunction, to be heard on Wednesday, will seek to show that Acheson and others represent a threat to the energy supplies of the nation through a constant picketing of the site.

It is understood the basis of the application is because he has trespassed onto the site through his picketing.

It is also believed that through issuing leaflets to workers on the site calling for direct action, he has incited the workforce to commit acts which may impact on energy supplies, and has at times, acted in a way that might have intimidated the workforce.

The Blacklist Support Group claim that if the injunction is granted, it will have implications “for the whole trade union movement”.

The group is planning a protest in support of Acheson.