The developments at Bank, Paddington and Southwark are part of a strategy to reduce the body’s reliance on fares for its income.

All three sites have received planning consent or resolution to grant planning. 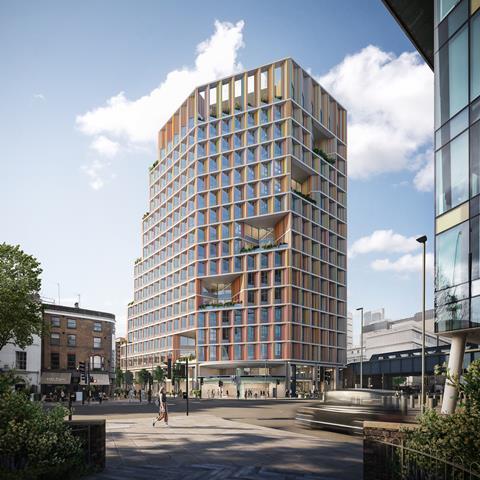 This scheme by AHMM will be built over Southwark tube station

The development at Bank Station, which has just opened its new Northern line southbound platform, will be located above the station’s new entrance on Cannon Street.

Plans are for an eight-storey development by Weston Williamson with a basement, featuring both office and retail space and external terraces on the upper floors.

At Paddington, the development by Grimshaw Architects will be located by Grand Union Canal, close to the new station for the Elizabeth line, which opens to passengers tomorrow.

>>> The scheme now approaching the finish is Crossrail: All aboard the Elizabeth line

The 19-storey, mixed-use scheme will include canal-side reception and use a ground and air source heat pump system.

TfL said the 17-storey development by AHMM over Southwark tube station will be one of the greenest large-scale commercial buildings in the UK. The hybrid timber structure will features external terraces on most floors.

Scott Anderson, head of property development at TfL, said: “We are looking for a partner to create best in class commercial office workspaces that will positively transform the capital and support its green recovery.

“This new investment and development partnership will form part of our wider commercial development programme, which seeks to build the homes and commercial spaces the city needs, while also generating vital revenue that reduces TfL’s reliance on fares income.”

TfL’s wider commercial development programme will also see thousands of homes built on the transport authority’s land in the capital.