The car in front is... a great way to find work in Dubai 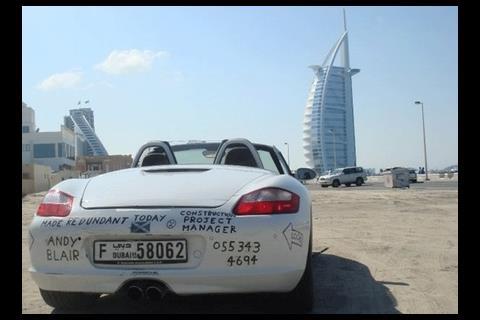 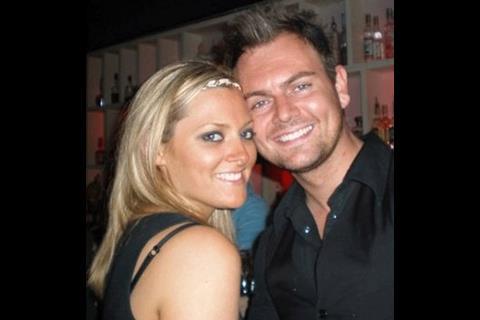 Andrew Blair (pictured with his girlfriend) says he had no plans to return to the UK when he was made redundant. "There are still prospects here and it's a thriving city packed with bars and clubs," he says

What would drive a seemingly sane man to scrawl in indelible marker on the back of his own spanking new Porsche? Being made redundant in Dubai is the answer, it seems.

When Andrew Blair, 28, defaced his sports car last month with the words, “Made redundant today – construction project manager”, complete with his phone number, he couldn’t haven’t known just how brilliant an advertising ploy it would be. His stunt got global attention. “I had so many calls – from job offers to Korean TV stations,” says Blair. Result? Just 15 days later he has a new job.

Blair has been appointed construction project manager at Dubai-based leisure and hospitality consultant Thomas Klein International. His first assignment will be running the firm’s fit-out of the Middle Eastern flagship branch of restaurant Ping Pong in Dubai.

Thanks to his imaginative approach to job hunting, Blair has had a lucky escape. Hundreds of UK expats in Dubai have been laid off as projects such as the Trump Tower and the 1km tower by Nakheel have been put on hold. According to research by Proleads, $582bn of schemes have been suspended in the UAE.

Blair had been working for Turner & Townsend as a project manager in the UAE for 18 months, when he was made redundant in January. He says: “I knew I was a candidate for redundancy because I’d negotiated such a good package.” He’d convinced T&T to pay him three times his salary in the UK, resulting in a package of £75,000, plus benefits.

Within three days of agreeing the deal he was on a plane to the UAE. “Someone picked me up from the airport, gave me a laptop, put me in an amazing apartment and the party hasn’t stopped since,” he says.

It all came crashing down on 18 January when Blair was made redundant. “I was pretty upset – it’s obvious that the jobs market is not what it was six months ago. Plus, I had just asked my girlfriend to come out from the UK, so I had her to support, and I’ve got the Porsche to pay for.”

Suddenly the car threatened to become an unbearable burden, as did Blair’s four-bedroom apartment. Extracting yourself from rental deals is nigh on impossible in Dubai, as we report on page 40.

Blair also had 37 unpaid car-related fines to pay. Totalling 3,850 dirhams (£709), they ranged from illegal parking, to speeding, to jumping a red light.

He was desperate. “I thought, I need to do more than just look for a job, I’ll get my car to do it for me. If you’re sitting in traffic here you’re going to get maybe 7,000 people going past, which is great exposure.”

And 15 minutes after Blair graffitied his own vehicle, it appeared on the local blog Life in Dubai. The story was then picked up by the Daily Telegraph, followed by CNN and BBC World.

Blair says he soon had people calling him about potential jobs but admits he was still worried – especially when the authorities tracked him down and impounded the now-famous car.

The job offer – which just about matches his deal with T&T – came just in time. “I have come out this smelling of roses,” he says. “Of course, others in my position haven’t been so lucky.”