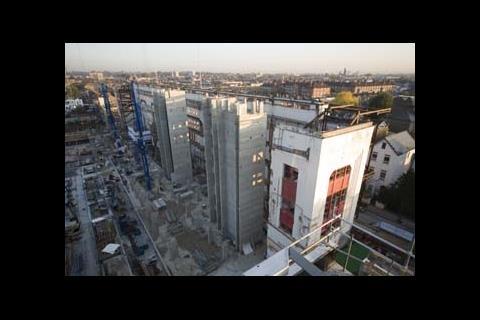 There was a bit of a kerfuffle in the press a couple of years ago about whether the British construction industry was techologically retarded or not. One of the arguments advanced was that the French were a long way ahead when it came to concrete, the composition and handling of which can be an extremely high tech business. So a good counter argument to that proposition is what Byrne Brothers can do with the stuff.

It is achievements are, in sober truth, little short of magical. Take the £300m (yes, £300m) Diamond Synchrotron for example, the one referred to in Byrne’s category entry. Building work for a physical sciences laboratory is without doubt the hardest and most dangerous job that a contractor can undertake, because the tolerences are as fine as they are intolerant, and because, if you do get it wrong, there’s the whole weight and authority of modern science there to prove you did. So Byne’s ability to put up the structural frame to within 5mm of where it was supposed to be was a kind of ultimate test of the contractor’s art. However, Byrne considers its work on Arsenal stadium (pictured) an even better test of its ability, with its reinforced concrete slab and core construction around complex temporary works and retained facades, the use of roll-matt reinforcement to suspended slabs, the installation of 3,000 precast feature columns and the operation of an onsite concrete plant to limit deliveries.

Then there’s the question of safety: concrete works are among the most dangerous of site activities. Byrne gives every operative an average of 25 days of safety training, but, much more importantly, arranges the work so that responsibility for safety is not thrust onto the individual worker. At Bankside 123 (The Bovis Lend Lease job in Southwark, south London, that has kept coming up at this year’s awards), Byrne identified an issue with edge protection on an early phase. So for later stages, it devised an entirely new approach to construction, with the working level and two levels below enclosed; the system then moves upwards using jump-form techniques that can be used without cranes.