10
The courage of David
News

The courage of David 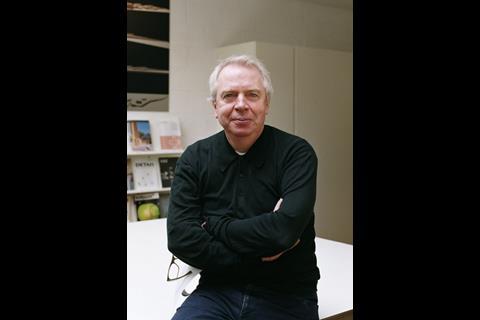 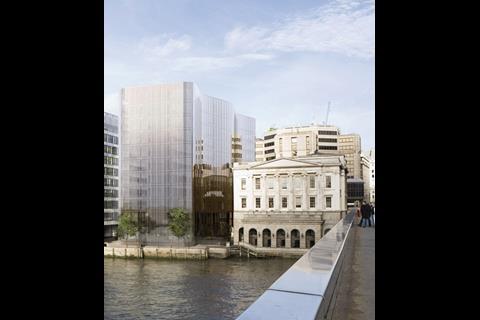 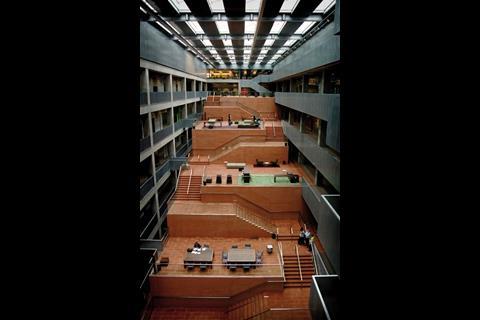 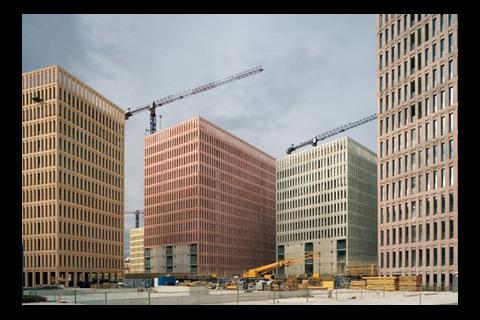 Stirling Prize-winning architect David Chipperfield has a fast-growing reputation in the offices world.

It is either a good morning to meet David Chipperfield to discuss office developments, or a supremely bad one. The previous day, last year’s Stirling Prize winner found out that his Seal House office project for veteran developer Irvine Sellar had been refused planning permission by the City of London.

The language of refusal is familiar: overlooking the listed Fishmongers’ Hall and obstructing viewing corridors to the Monument. What was unfamiliar was the design itself: a simple, unfussy 204,000 sq ft glass object set in the muddled margins of the Thames.

In the booklined meeting room at his Camden studios, Chipperfield’s reaction ranges from resigned stoicism to brittle annoyance. ‘Yes, it was a very sensitive site, but CABE [the Commission for Architecture and the Built Environment] supported it strongly,’ he sighs. ‘And we got 11 to 13. We came very close to turning the thing over. Nearly half the committee was willing to go against the planning officer [Peter Rees] ... ’

Then, the frustration and disappointment shows.

‘We’ve been working for one and a half years on that project. Yesterday, it was just Russian roulette.’

Irvine and his son and co-director, James Sellar, may appeal the decision, which Chipperfield believes is indicative of a wider malaise. ‘The problem is that the English planning system doesn’t allow for a thorough discussion of architectural language, or quality, so we end up fighting in the most arbitrary manner. There’s no lining-up between the planning process, the RIBA, the architectural community ... there’s no real debate. Nobody hears about the sort of architecture one wants in London.’

That is Chipperfield: thoughtful, intellectual, and not afraid to voice strong opinions in public. And to go with an uncompromising personality, there is an uncompromising architecture: he is known for an architectural purity, primary geometries and a back-to-basics materials palette – a restrained style that is the perfect backdrop for arts and cultural clients, from Iowa’s Figge Art Museum in Davenport and the Des Moines public library, to Wakefield’s forthcoming Hepworth Gallery closer to home.

In other words, David Chipperfield Architects is not the type of practice you would expect to find on a spec City scheme, where the architecture amounts to fitting a facade around a floorplate and commercial realities lead to compromise at every turn. But to Chipperfield, the challenge lies in finding the elegant solution, not the perfect client.

‘You’ve got to decide where the architectural idea sits. It’s always interesting if you can re-examine the organisation of the institution, as opposed to just putting a dress on it,’ he says. ‘But there are times when that’s what the job is: shaping the building.’

For most of his career, 54-year-old Chipperfield has been something of a minority taste, his work better known to students and critics than UK clients and or even contemporaries. The Kingston University and AA graduate’s first significant new build – the quietly confident Henley River and Rowing Museum in 1997 – promised the arrival of an important new talent.

But it was followed by the era of the lottery-funded mega-project, and Chipperfield’s face did not fit.

Instead, the practice worked in Japan and Germany, then started an astonishing record in design competitions. The soon-to-be-completed Barcelona Law Courts, the £190m re-awakening of Berlin’s Neues Museum and a £118m technology and arts quarter in Segovia were all won this way.

A decade of achievement overseas and in public buildings reached a stunning climax last November. In an unprecedented double act, both his Americas Cup building in Valencia and the Museum of Modern Literature in Marbach, southern Germany, reached the final six of architecture’s prestigious Stirling Prize. Marbach triumphed, recognised for Chipperfield’s achievement in designing stillness when so many others design fuss. The celebratory party held at short notice at the RIBA was filled with a giddy, disbelieving delight that the outsider had triumphed over the establishment.

But there is also a concurrent strand of office projects in Chipperfield’s career, building in Berlin, Hamburg and Dusseldorf during the 1990s and, more recently, a refurbishment in Amsterdam and a 258,330 sq ft new-build complex at the southern end of Barcelona’s Diagonal.

Coincidentally, that strand also reached a high point last year with the completion of his critically acclaimed 322,920 sq ft BBC Scotland headquarters in Glasgow’s Pacific Quay – although the project was marred for the practice after the client forced it to hand over its Stage E design to the local executive architect amid talk of budget overruns, on which Chipperfield has rather more to say later.

Today, Chipperfield is bemused that UK clients seem unable to synthesise the two sides of his career. ‘While we’re valued everywhere else, it’s difficult to get listened to here. There’s a sort of perception that we’re difficult, I suppose.

‘On the other hand, we’ve spent 20 years delivering projects. We build under the most appalling conditions, on cost and on time, and we have a rather good track record. It’s just not in the developer community in London – we don’t actually know that community.’

But as he says, the 160-strong firm is interested in progressing ideas, while the architectural debate among UK developers and planners – although much improved on a decade ago – is still conducted at knee level.

Why is there no great innovation in office space? Can’t we push it higher? Couldn’t City planning officer Peter Rees say: I’m slightly bored by these great big office floorplates?

‘Why is there no great innovation in office space? Can’t we push it higher? Couldn’t Peter Rees, for instance, say: I’m slightly bored by these great big office floorplates?’

He pulls a well-read architectural monograph from his shelf and points out a personal favourite, Herman Hertzberger’s insurance company headquarters in Apeldoorn, the Netherlands.

‘Built in 1972, and there’s been nothing better since. I saw it when I was a student. It’s adorable.’

But his own BBC Scotland design demonstrated originality and innovation. Conventionally enough, it centres on an atrium around which offices are arranged in galleries. But that atrium is an architectural icon-in-the-making, filled with staggered platforms and steps in local red sandstone that also double as informal meeting areas and part of the building’s circulation.

With its steel balustrading and exposed services, the aesthetic is industrial-chic without being chilly, subliminally suggesting that TV is an industry for the modern age.

‘But it’s easier when you’re designing for an institution rather than a speculative client,’ Chipperfield points out. ‘We had to convince the BBC that the space in the middle wasn’t coming out of their net to gross. We had to coax them to believe that they could use their general office space in a different way, and so the dedicated office space could be smaller.

‘That was quite a difficult discussion to have. No one’s just going to pay for extra space. But I think it’s paid off completely.’

In the publicity surrounding the building’s opening last autumn, it transpired that the public falling-out between client and architect meant that Chipperfield had not even been to see his own building. (Did I say uncompromising?) His explanation carefully lays the blame with BBC management collectively rather than individually, and goes back to one of his favourite themes: the client-architect relationship.

‘The BBC got into a position where they thought: if we choose a good architect, then subcontract responsibility to project managers, we’re going to get a good building. But in the end, you can’t escape from being a client. We had all the right components – we had Land Securities, and Bovis – but it wasn’t well managed. In that situation, we became the whipping boys [for budget revisions].’

But after the project completion, he says he had the satisfaction of being told by a BBC property manager that the building was ‘the best value for money we could have dreamed of’. And he does now talk of fitting a trip to Glasgow into his frequent-flyer schedule.

If client-commissioned projects are most likely to lead to design innovation, the next great leap forward in office architecture might come from Switzerland. On the Basel office campus of pharmaceuticals giant Novartis, a Chipperfield design is to join works by architects such as Japanese practice Sanaa, Frank Gehry, and Swiss designers Peter Markli and Diener & Diener – all held together by a masterplan that prioritises urban spaces over sprawling floorplates.

‘Someone’s created an environment to experiment and said: “We’ll listen to these experiments”,’ he says approvingly.

But in the coming months, office development could shift away from speculative schemes to prelet or client-led projects. It is possible architectural innovation could be a surprise beneficiary of the credit crunch.

Chipperfield, having seen more property cycles in more countries than most developers, is not optimistic. ‘In Berlin, a developer wouldn’t start a project until there’s a tenant. But that puts a huge time pressure on the design process, because the tenant wants the building very quickly. We did a number of projects in Berlin where we had just six months to convert a building.’

Neither is Chipperfield convinced that the sustainability agenda will inject fresh ideas, mentioning a project for Argent in King’s Cross where planners are angling for a PV-panel facade. ‘It’s slightly decorative – symbol more than reality.’ Instead, he takes the question back to the inherent sustainability of strong, clear architectural ideas.

‘My idea is to bring architecture back to its essential core. If buildings have good spaces you end up using them. You don’t rip them out all the time.’ Chipperfield would no doubt rather be described as principled rather than uncompromising, but it is certainly tempting to draw an analogy between his exacting architecture and strongly held opinions. But that also means he has kept faith with a consistent architectural style rather than being sidetracked by PR and prestige projects. For that reason, Chipperfield is a perfect match for certain developers.

‘I have three criteria in terms of projects. We like not to lose money, and make a bit of money. We like to do architecture of high quality and we like to have a good time. Our bottom line is that we have to have two of those.’

And you can’t say fairer than that.