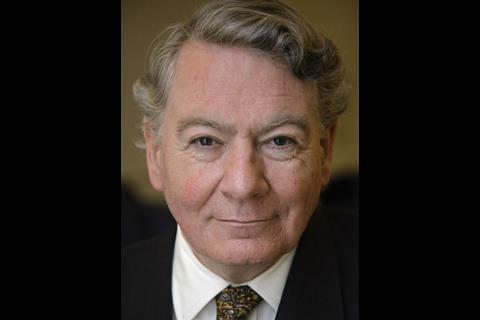 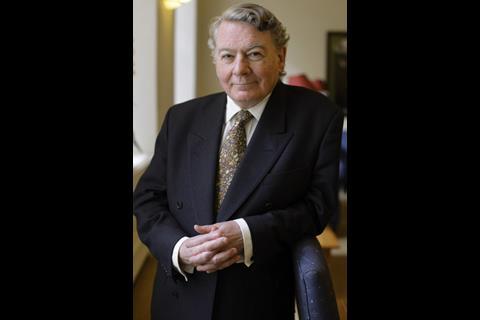 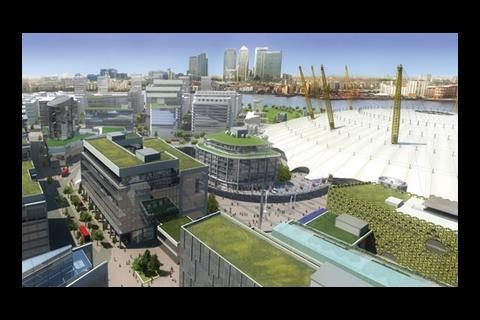 Bank cheque: Plender helped to negotiate Quintain’s £700m refinancing for projects such as Greenwich Peninsula, where 135,000 sq ft of offices have been prelet to Transport for London

John Plender, Financial Times sage and chairman of Quintain, predicts the future of the market at this year’s BCO conference.

Question: If the US goes into recession, will this be good or bad for the UK property industry?

As the industry struggles to make sense of the challenging post-credit crunch terrain, surely a US recession would be a bad thing?

Perhaps best known for his regular columns in the Financial Times and, until recently, Estates Gazette, Plender’s seasoned City commentaries have a special relevance for the property industry – he is chairman of Quintain Estates and Development, whose flagship regeneration projects at Wembley City and Greenwich Peninsular will eventually deliver 3.5m sq ft of office space, as well as retail development and thousands of homes.

Plender’s unique standpoint on the credit crunch make him one of the star attractions at the forthcoming BCO conference in Brussels, where he will expound on the economic and financial challenges facing the industry – and on how a US recession could help alleviate the current crisis.

‘Let’s start off with the big picture,’ he says, relaxing into a huge sofa in Quintain’s Mayfair boardroom. ‘The most important and difficult question is what will happen to the US economy, as this dictates conditions for the world economy.

‘The key question is how long will the US go into recession for? It is inevitable that the rest of the world will slow down considerably. However, a recession will cause inflationary pressures to lessen – and that’s a good thing.’

Readers of Plender’s columns will be familiar with the term ‘stagflation’ – the combination of sluggish economic growth and huge inflationary pressure – from which he believes the US and UK economies are suffering.

‘The central banks have a horrible dilemma. In the US, where the Federal Reserve has a joint mandate to control inflation and ensure economic growth, it is difficult to know what to do. This credit crunch is the worst since World War II.

‘If you keep interest rates high, that will deal with the inflationary problem. Or, should you keep them low to try and deal with the credit crunch?’

Plender believes inflation is the greater evil, but he also maintains that the US is in denial over the scale of the problem, as its core inflation indicator does not take into account food or fuel – two factors that have seldom been out of the headlines in the last two months.

‘The exclusion is extraordinary, but it has always been the view of the Federal Reserve that food and energy prices are subject to short-term volatility and that the headline rate and the core rate of inflation will always converge in the end,’ he explains.

‘However, there is absolutely no academic evidence that this is the case. Voters are feeling the cost of living going up much faster than the US target rate suggests.’

Although a US recession will be bad in the short term, it will have the effect of easing inflationary pressure. If you don’t have a recession, the severe problems with inflation that result will be more difficult to handle than a short-term recession,’ Plender states. ‘This is why I believe a short US recession is the lesser of two evils.

‘Of course, economic growth will be less, and for property, this will affect rental growth across the whole of the developed world.’

The UK also has high inflation, but Plender believes another key indicator is the worsening health of the housing market. At the beginning of May, Nationwide data showed that the average UK house price had fallen for the sixth month in succession, and the headline figure was 1% below the same period a year ago.

The central banks have a horrible dilemma. This credit crunch is the worst since World War II

The credit crunch caused mortgage lending to fall to new lows and spooked housebuilders such as Persimmon into halting new development.

‘To a degree, people’s experience of inflation has been more worrying than the core figures suggest,’ says Plender. ‘But the big issue is housing costs. We are now going into a housing market downturn, which marks a real watershed.’

He believes the UK faces a period of lower growth, but risks only a ‘potential’ recession.

‘It is not an easy environment for property people to deal with, but if the US doesn’t go into recession, interest rates will have to remain uncomfortably high, which will be quite difficult medicine for us all to cope with,’ he says. ‘Sterling has the potential to become much weaker if US interest rates remain high. This means that getting out of our present difficulties would take far longer than a short, sharp, recession.’

An added threat is the damage that high interest rates will wreak on the troubled US housing market.

‘If the Fed has to keep interest rates higher for longer, what effect will this have on the extraordinarily leveraged home loans taken out at the peak of the boom?’ Plender asks. ‘There will be more foreclosure, more distressed sales and the downturn will be exacerbated.’

As in the UK, the US housing crisis has hit consumer demand – the engine of the US economy. So little comfort can be drawn from the US corporate sector’s slightly better state.

‘It is probably inevitable – particularly in an election year – that fiscal policy will become more flexible to compensate for the damage in the housing sector,’ Plender predicts. ‘All of the Anglophone economies have experienced a sustained housing boom, which is now on the turn. Depending on the extent of the boom, that turn could be to decline, or bust. So the challenge is how to maintain demand when households are being put through the wringer.’

Plender points out that under Gordon Brown’s ‘golden rule’ – that over an economic cycle, a government should only borrow to invest, and not to finance current spending – there is no fiscal room for manoeuvre. Given the recent climbdown over the 10p tax rate, the prospect of further tax rises would be a hammer blow for the Brownian regime.

‘I can only assume this rule will be broken,’ he concludes. ‘For the UK property market, the damage from the fallout from the housing boom will be mitigated by government loosening fiscal policy. The government will break the rules to ensure that the recession – if it comes – will not be too deep.’

Yet a comparison between the UK housing market and the US is of limited value. Our small island suffers from a housing shortage, compared with massive overdevelopment across the pond.

‘If you look at the relationship between house prices and earnings, our boom is more extreme than the US,’ Plender reasons. ‘Historically, the UK housing market has suffered very big falls.

In the early 1990s and early 1980s there were adjustments of between 20% and 30% from peak to trough, in real terms, after allowing for inflation.

‘Things are different this time. We are in a much lower-interest-rate environment. I don’t think the adjustment need be so extreme as previous busts.’

Housing market commentators concur that, while there will be a downturn in the UK housing market, there will be clear regional variations, and London is likely to prove more robust than the Midlands and northern England.

But the commercial property industry will not be as fortunate. ‘The problem for London is that one has to account for the financial services business, which is going to take a very big knock,’ Plender says. ‘You can already see that, purely on the basis of the credit squeeze, a lot of financial jobs are going to disappear.

Throughout my career, City offices have always been a boom-and-bust type of investment

‘The reduced volume of securitisations means that some aspects of the financial markets are still virtually closed, and what people call the “shadow banking system” is ceasing to exist. Off-balance-sheet vehicles are unable to raise finance independently, and there is very little activity in the asset-backed paper markets.’

The banks have already started slashing jobs, yet the forests of cranes hovering over the City of London continue to build out millions of square feet of speculative space.

‘The trouble with the City office market is that there are two levels of gearing,’ Plender says. ‘The finance industry is a highly leveraged industry. Most balance-sheet lenders are highly leveraged, and when there is a downturn, it is extreme.

‘On top of that, the property companies they lend to are themselves highly leveraged, and doing a lot of speculative development. Throughout my career, City offices have always been a boom-and-bust type of investment.’ And there is no question which of the two scenarios the Square Mile is headed for now.

Plender is less gloomy about the West End office market. Although rents are under pressure, the supply-and-demand equation is nothing like the City. He agrees there are ‘pockets’ in the UK’s regional office markets that look unattractive. But his outlook on the wider occupational market is not entirely pessimistic.

‘I’m not as worried about commercial property as I was in the 1980s or 1990s,’ he admits. ‘Certainly, if you look at historical precedent, in the early 1990s, early 1980s and mid-1970s, when occupational demand collapsed, things were particularly bleak.

‘But it is not anything like as bad this time around. We might just escape recession. If we don’t, it will be relatively short and relatively mild, with two to three years of below-trend economic growth in the UK. ‘

There is one caveat to his optimism. ‘Occupiers are not going to be delivering the kind of support to rental income you might wish.’

Property’s reliance on the banks – as backers and occupational force – has caused the industry to hold its breath over the recent rights issues (see timeline, below).

‘The important thing in a financial crisis is to get all the bad news out of the way,’ he says. ‘That banks are refinancing themselves is good news. Their capacity to lend will be restored sooner.

‘Step one is to restore the capital base. Step two is for the market to revive in terms of paper that’s been difficult to price – but it will take time to get the financial system out of systemic shock mode. Then, there will be a reactivation in the lending market for the property industry.’

Plender has firsthand experience of stormy conditions in the lending market. Two months ago, Quintain successfully refinanced more than £700m of debt with nine separate banks, and Plender reports this was at only a marginal increase in interest costs.

‘It is noticeable that banks are segmenting their market – deciding with whom their main relationships are and ditching the others,’ he notes. ‘The market has become polarised. If you’re a well-managed company with a lot of potential, then you’re OK. But if you’re too speculative, fledgling, or have questionable management, these are difficult times.

‘We have been fortunate and enjoyed good support from our banks. But the market is changing almost daily. We completed our refinancing the week before Bear Stearns got into trouble. What the terms would have been the week after, I have no idea.’

John Plender’s column on economics and business appears on alternate Wednesdays in the Financial Times.

The BCO conference will be held at the Conrad Brussels hotel on 4-6 June.

Parallel lines: how the credit crunch has swept across the Atlantic

Northern Rock seeks emergency financial support from the Bank of England, triggering a run on the bank.

The Royal Bank of Scotland writes down £5.9bn, and sets out
a £12bn rights issue.