7
The North Sea vs your back garden
News

The North Sea vs your back garden 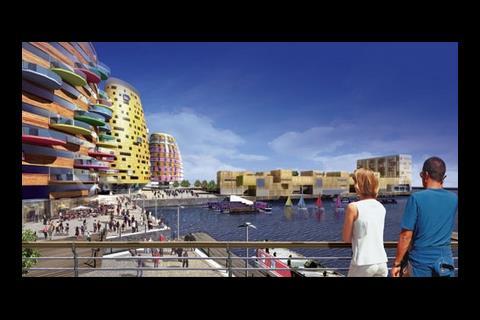 The £200m Middlehaven development in Middlesbrough Dock, by Studio Egret West and BioRegional Quintain, will be carbon neutral 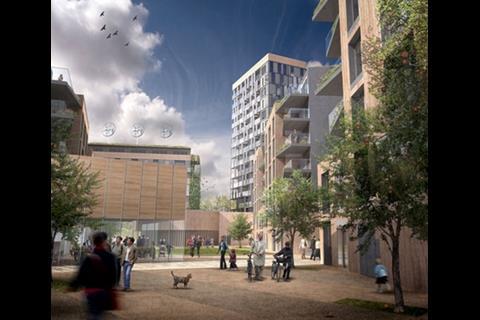 Arup says energy can be generated at a local level using renewable sources. It was the consultant on One Gallions in the Thames Gateway. This is a zero-carbon scheme being developed by BioRegional Quintain and Crest Nicholson for housing provider Southern Housing Group. It combines renewable energy production with integrated waste management and green transport solutions

Everyone accepts that electricity has to come from zero-carbon sources, but there is a big fight in the offing over where those sources should be located

The UK home is about to undergo a radical transformation, thanks to the publication of the government’s latest legislation on sustainable building.

The Building a Greener Future document states that new homes should be zero-carbon from 2016. To achieve this, housebuilders will have to rethink the way they heat and power dwellings.

The average home consumes 3.3MWh of electricity and 20.5MWh of gas a year, which makes it responsible for 5.63 tonnes of carbon dioxide. Multiply those figures by the 160,000 home produced each year, and it is clear that housebuilders will be getting into the generating business big time.

This will not be optional. The document contains draft planning guidance that strongly encourages councils to insist that a large proportion of a development’s energy requirements be generated on site.

This means housebuilders will have to turn their schemes into mini power stations and equip homes with technologies such as wind turbines, solar panels and combined heat and power (CHP) plants.

A debate is now beginning as to whether onsite renewables are the right way forward. Many are arguing that it is easier and cheaper to import electricity from the National Grid, generated from renewable sources such as offshore wind turbines.

Cullen says a small building-scale turbine generates only 20% of the energy generated by the equivalent turbine installed offshore. “There’s a realisation that this route has been over-hyped. It’s not reliable enough to base a strategy on,” he says. A community-scale turbine is more efficient if placed in a particularly favourable location, but he maintains that it is still far better to move off-shore.

John Tebbit, the industry affairs director of the Construction Products Association, is equally scathing about on-site renewables, particularly on small urban sites. “You will need to spend a fortune on wind turbines and photovoltaics. It’s particularly awkward when there’s not enough roof space for PVs and where surrounding buildings make wind turbines impractical.

“It would be much cheaper to get a time-share in a socking great windmill in the North Sea, but the government doesn’t seem to feel that is kosher.”

Tebbit and Cullen are not against building and community-scale renewables if they eventually prove to be the most economical way of providing heat and power on site, but they believe importing low-carbon electricity from the grid should be an option.

“Electricity may soon become a low-carbon method of power generation, through carbon capture of fossil fuels, tidal barriers, nuclear power and wind turbines,” says Cullen. “Why are we throwing money away on inefficient ways of generating electricity?”

Tebbit’s fears over small-scale renewables is relevant in London where mayor Ken Livingstone recently published a climate change action plan that calls for 25% of London’s power to be provided on a local scale by 2025.

The mayor is keen to move away from distribution of energy via the national grid because of its reliance on fossil fuels and because up to 10% of electricity is lost in transmission.

In a bid to prove the worth of decentralised heat and power, the Greater London Authority commissioned Arup to come up with a zero-carbon strategy for the Gallions Park development in east London.

Central to Arup’s zero-carbon solution at Gallions Park is a process called biogasification. This involves the conversion of organic material into a gas which can be used to fuel a CHP system.

Some industry experts have voiced concern over the supply of biomass to fuel CHP units. Crispin Matson, the managing director of Rybka, says: “Can you get enough biomass if everybody is using this method to reach their 20% renewable energy target? It’s a worry.”

Trott responds that supply will follow demand. “We’ve not seen a problem in the supply chain. The longer term the contract the better, as it gives the grower guaranteed demand.”

He believes our existing forests and agricultural land will “get us most of the way”, although biomass may have to be imported if every new development used biogas. But he says ships could be powered by biodiesel to minimise their CO2 emissions.

As homes sold for more than £250,000 attract a 3% stamp duty, such a move would see homebuyers saving £7,500 on the cost of a home – more than enough to cover the cost of developing zero-carbon homes. In the recent budget, Gordon Brown said there would be no stamp duty on zero-carbon homes under £500,000, but only if they were built between 2009 and 2012.

If housebuilders are to build zero-carbon homes within the next 10 years they will not be able to meet the challenge alone. As well as help from the Treasury, manufacturers will have to be able to supply efficient ways of supplying energy using renewables. “There is currently a technology gap where zero-carbon generation does not exist, from about 15KW to 50KW,” says Trott. “There is a potential for good manufacturers to exploit this.”

A national network of biomass suppliers will also have to be established and housebuilders will have to find someone to maintain the systems. It’s a challenge, but one that the government - and London’s mayor - are determined housebuilders will meet in the next 10 years.

How will it be achieved?

Arup is devising a zero-carbon strategy for Gallions Reach in east London as well as the new Chinese city of Dongtan.

Trott says all the sites have broadly the same strategy despite the differences in their scale. Gallions Reach will have 200 dwellings, whereas Dongtan will eventually be an entire city. Both will rely on a CHP systems fueled by biomass.

In China, Trott proposes using rice husks to power the generators while at Gallions Reach the fuel could range from coppice from UK woodlands to rape seed oil.

To provide a further electricityDongtan will also have six huge wind turbines on the edge of the city.

Trott says all sites have different “yields” in terms of the amount of renewable energy they can provide. The renewable strategy will depend on the location of the site and what local natural resources can be harnessed to provide heat and power.