The only way is up: China’s airport building programme 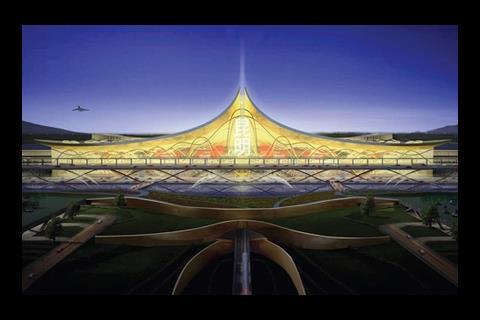 China will spend £44bn on airports in the next five years and there is plenty of opportunity for British firms to get in on the aviation action. Victoria Madine explains what it takes to break into the market

Once empty but for the odd flock of cranes, Chinese skies are now continuously buzzing with planes. As the country’s juggernaut of an economy lurches ahead, air traffic is set to increase even more and, of course, it will need more airports to cope.

A massive building programme is already underway. Over the next five years the Chinese government is to spend £44bn on refurbishing and building 95 airports. There will be plenty of opportunities for British construction firms, but if you do fancy a slice of this market, be warned – only the most expert and dedicated need apply.

Consultant Atkins is a major player here. It employs about 600 people across China and its major projects in the country include the masterplan for Xian Xianyang International Airport in north China and the design of Taiyuan Airport in Shanxi province.

Paul Rice, associate director at Atkins in Shanghai, says: “This is a vast market for us. When I first came here airports still had MiGs [Russian-designed fighter planes] lined up alongside the runways and everything was moved by train. Now there’s a demand for new, upgraded airports to replace some of those seventies monstrosities.”

Arup is designing the new terminal building for Kunming Wujiaba International Airport, in Yunnan province, which is currently under construction. This follows its successful collaboration with architect Llewellyn Davies Yeang to design Chongqing Jiangbei International Airport in Yubei district, completed in 2004. The consultant has about 600 employees in China.

Peter Budd, chair of Arup Aviation and the UK Trade & Investment’s airports and aviation advisory council, says: “In the airport sector, the UK punches well above its weight in design, management services and products. The fact that airport operator BAA was one of the first airport groups to be privatised means the UK has experience in exploiting the retail and commercial opportunities of airports, which also has a bearing on design.”

Even with all this experience, winning airport contracts in China is tough. At the apex of the pyramid of authorities you have to scale is the State Development Planning Commission (SDPC). All projects over £15m require its approval and, with no public enquiry system in place in the country, its decision is final.

All airport projects are overseen by the Civil Aviation Administration of China (CAAC), which traditionally acted as manager of all airports but in recent years is behaving more like a regulator. The CAAC’s changing role is a reflection of the growing power of municipal airport authorities – though the SDPC can approve or reject projects, it cannot force a municipality to undertake a scheme it does not want.

The scheme moved along at breakneck speed. Our team
literally worked 24 hours a day

Some regional airports’ influence can also be extensive. For example, Beijing Capital Airport Group, operator of Beijing’s international airport, has commercial interests in 12 other Chinese airports, making it the second largest operator in the world (the largest is Spain’s national airport operator Aena).

To complicate matters further, tenders are not awarded directly by the client but by an evaluation committee that consists of at least five members. Only some are required to have specialist knowledge of the industry and are selected from a list of names approved by a local construction committee.

Then, if a tender is selected, every detail will be scrutinised by a local design institute, which has the power of veto. The upshot is that you really need good relations with central and local officials involved in the procurement process. “To be successful, you have to base yourself in China for the long term to build up these relationships,” says Jeff Liu, general manager of Atkins’ Beijing office.

In any case, Chinese law dictates that foreign firms must team up with local companies to bid for work, and trading laws require both individuals and companies to hold a licence to carry out a job. It is essential you choose a partner firm that is in favour with the local government.

You must also take time to understand your client’s needs, says Jack Sun, vice president of the Chartered Institute of Building (CIOB) in China and chairman of Shanghai Jianke Project Management (SJPM). SJPM oversaw the construction of terminals one and two in Shanghai’s Pudong International Airport, completed in March 2008. Sun says it’s important to remember that most airports cater for domestic travel. “You should analyse the features of your client’s needs. For example, lots of small aeroplanes use China’s domestic airports, so the operation speed of these will be much slower.”

“You must also balance the client’s needs against their expectations,” says Budd. “Municipal airport authorities love working with international firms and airports are seen as important gateways to the provinces and status symbols. Clients can be shocked by the premium they must pay foreign firms,” he adds, “but when an agreement is reached, the money flows and we have never had any problems getting paid.”

When you get onto a tender list, the real work starts. Bidding for Chinese airport contracts is time-consuming and a huge financial commitment – so it’s risky from a business point of view. The exact cost depends on the type of work but many firms find that if they put the effort in, even if they do not win the contract, they win some work related to it and make valuable contacts in industry. This has been Arup’s experience. So, usually, the effort pays off.

Mouzhan Majidi, chief executive of Foster + Partners, says the practice had to wait five months to find out if it had won the Beijing job, but in the interim period the architect was expected to refine the designs so that when the contract was awarded in November 2003 they could hit the ground running.

“The scheme then moved along at breakneck speed,” says Majidi. “We had to produce a detailed planning submission in four weeks. Our team literally worked 24 hours a day with 15 architects based in Beijing and 35 in London all working on the project. By the end of January 2004 we had produced the information needed to allow the contractor to put contracts out to tender. The ground breaking ceremony took place on 27 March the same year.” The terminal was completed two months ahead of schedule in February 2008 and, while the pressure was particularly great on this key flagship project, consultants agree that the pace of work in China is generally extremely fast.

So how do you go about impressing all the various client stakeholders? According to Budd, the Chinese government wants airports to be as green as possible, so designs that mitigate the environmental impact of air travel score extra points. Earlier this year, Arup and Manchester Metropolitan University’s Centre for Air Transport and the Environment signed up to a scheme to exchange technical knowledge that promotes sustainable aviation with staff from the Chinese Civil Aviation University in Beijing. The hope is that sustainability will continue to rise up the Chinese government’s agenda. Atmospheric pollution may well decrease in the People’s Republic of China, but the sheer enormity of the increase in aircraft traffic will keep the skies crowded for the foreseeable future.