The road from Wembley 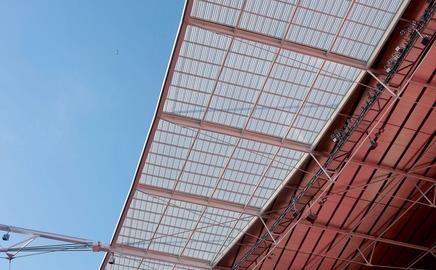 SME FOCUS — Weatherwise got waylaid on the stadium’s roof, but now it’s looking to the future

When Wembley stadium reached practical completion last week, Multiplex and its client were understandably relieved. Away from the headlines, however, another firm is preparing for life after Wembley: envelope specialist Weatherwise, which designed and installed the stadium’s main roof.

After spending year longer than it had expected to at Wembley, Weatherwise posted a loss of £157,000 for 2006 on turnover of £14.5m. But this month, with its resources finally freed, the firm will make a pre-tax profit of about £300,000 on turnover of £16m. After this wobble the Chester-based company is relaunching the expansion strategy it begun six years ago.

Weatherwise was founded in 1973 as a roofing and cladding contractor specialising in industrial facades, airports and warehouses. Then, in 2000, it changed focus to concentrate on public sector contracts and high-rise flats.

“The change was driven by the market,” says David Gillespie, the firm’s sales director. “We made the decision to look at higher value end growth, because it was more profitable.”

The change of tack resulted in Weatherwise winning work for some of the UK’s biggest contractors, including Sir Robert McAlpine, Willmott Dixon and Amec.

Paradoxically, the drive for growth led it to curtail operations in the Far East and Canada. “In the short term at least, we’re focused on the UK,” says Gillespie. “We believe there is enough opportunity here to meet our objectives.”

These centre on raising turnover to between £20m and £22m by 2010, an increase of about 35%. Weatherwise’s projects tend to have long lead-in times and a long duration, which mean it has an order book stretching forward to 2009.

It is wary of taking on too much too soon, however; a mistake that has contributed to the demise of cladding and roofing contractors in past, most notably Coverite.

Weatherwise’s workload includes a lot amount of PFI work: it is on site at Alfred McAlpine’s Churchill hospital in Oxford and will shortly start work on the Stoke Schools PFI for Balfour Beatty.

A year’s delay is a long time, but Multiplex is very fair

PFI tendering does not always offer the greatest return, as Weatherwise is well aware.

“There have been plenty of instances where we’ve gone through long pre-construction processes only to find it’s come to nothing,” says Torkington.

“Nobody wants to waste time, effort and money, but it’s too big a sector not to be involved in.”

Weatherwise is not ruling out further work on stadiums or for Multiplex – although the two are unlikely to go together.

Weatherwise, which finished at Wembley just before Christmas, did make a profit on the contract, after Multiplex revised its deal to take account of delays. It was the tie-up of resources that caused the specialist to suffer, but Torkington does not blame the contractor.

He said: “The project constrained our resources, and a year’s delay is a long time, but Multiplex is very fair.

“You’re tarred with a brush if you worked on Wembley, but when people look back on the project, it’s a great stadium. We would work for Multiplex again.”

Another sector Weatherwise may get involved in is nuclear work, if, as expected, a new wave of reactors is commissioned.

“Decisions on a political level about nuclear power will open up another market, which we may or may not enter,” says Torkington. “You don’t need any different expertise for nuclear, although obviously security [of the site] is a factor.”

For more pictures of Wembley, go to www.building.co.uk/wembley