Theft from steelworks leads to death in Wales 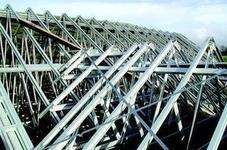 A man who attempted to steal a copper cable from a former steelworks died after contracting carbon monoxide poisoning on the site, it was revealed yesterday at Newport Coroner’s Court in Gwent, Wales.

The 33 year old father of four, Terence Robert Lewis, collapsed on the former Corus steelworks site in Ebbw Vale, Wales, on September 1 after inhaling fumes from the petrol powered disc cutter he was using to extract copper wire from a service tunnel.

Lewis was accompanied to the site by his accomplice Leighton John Wall and a 16 year old youth, who remained on the surface while the others went into the tunnel. He raised the alarm after noticing the pair were engulfed in fumes.

The coroner heard that initial efforts to rescue Wall and Lewis had failed due to “horrendous conditions” on the site and because firefighters had to wait until Western Distribution workers arrived to switch off the power supply to avoid electrocution in the tunnel. When rescued, emergency services managed to revive Wall but failed to save the life of Lewis.

Detective Sergeant Glynn Davies of Gwent police told the coroner that firefighter carbon monoxide detectors measured levels of 400 parts per million inside the tunnel. The safe level is below 35. He added the fate of the two men was a lesson to anyone considering entering the sites.

Gwent coroner, David Bowen recorded a verdict of death by misadventure. He said: “Rarely has the old adage that crime does not pay been so graphically and tragically illustrated.”

Gwent police have reported an increase in the number of thefts from buildings and building sites in the past year following the rise in scrap metal prices.

Inspector Terry Davies, Community safety department, Gwent Police said: “Those who steal metal often risk serious harm or death when stealing from electricity sub stations, railways and other such industrial sites. We have implemented a number of operations targeting scrap metal dealers to help reduce the market for stolen metal to act as a deterrent.”