Contractors should not use tight margins as an excuse for not cutting carbon emissions, the chief executive of Skanska UK has said.

Speaking at COP26, Gregor Craig told Building that it was “quite feasible” even for SMEs to switch to greener ways of working with the right mindset.

His comments come as construction takes centre stage at the Glasgow climate conference, which was attended by Boris Johnson yesterday. 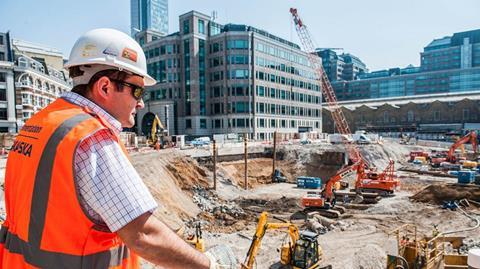 Skanska has stopped using fossil fuels in its plant and equipment

Craig said: “I don’t think we can use the tight margins that exist in the industry as an excuse because there are lots of alternatives that we’ve identified already that actually don’t cost anymore.

“Once you have thousands of contractors, from SMEs through to the tier ones, thinking much more in that mindset that we’ve just got to find alternative ways of doing it, I think you’ll be surprised quite how much we can achieve, because we are only at the beginning of that journey.”

Skanska no longer uses fossil fuels in its plant and has switched to using more sustainable vegetable oil.

> Built environment can meet net zero by 2050 but only with urgent government action, says report

The firm also does not offer conventional company cars with combustion engines for its staff, who are given the option of either a fully electric or hybrid vehicle.

Asked what he thought of COP26 so far, he said it had given him optimism that the industry would get to net zero.

“I think that’s one of the things that COP has done for me. People have actually achieved a lot already and talking to them about how they’ve achieved it. It’s sending me away with lots of good, new ideas.”

Today the conference will focus on the built environment, which contributes around 40% of global carbon emissions.

The Construction Leadership Council is due to chair a panel discussion on the topic at 9.30am featuring Keltbray group chief executive Darren James and Travis Perkins chief executive Nick Roberts.

Also taking part in a series of debates on how the industry can cut emissions will be Atkins UK and Europe chief executive Richard Robinson, Saint-Gobain UK and Ireland chief executive Mike Chaldecott and former RIBA president Stephen Hodder, director of architect Hodder and Partners.