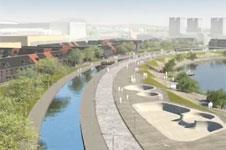 A trainee QS does the sums in support of free bars; and why the Glasgow Commonwealth Games village is a waste of money

I am not sure attacking EC Harris for having a free bar is a fair comment… as an undergraduate bringing in fees close to that of a graduate whilst working on the same wage as a waiter – I alone can fund the bar, maybe not quite a QS… besides, if you calculate the value of working an extra half hour at work (bar starts half hour after work officially finishes) "gratis" – a free QS once/twice a week for at least half an hour over a year I am sure the benefits will outweigh the costs – although not sufficient to fund the QS made redundant.

What nonsense. Why are we constructing permanent structures for a transient event? Who will want the leftover 1,400 homes? What is the carbon footprint of all this? I hope we can explain to our children that this event and all that went with it was really necessary.
Simon

Fantastic! Finally a site dedicated to the truth about the small builder. I do not deny that there are con merchants within the trade but that coin flips both ways.

We should be able to access a site solely dedicated to 'dodgy clients' whether they be public sector or commercial and there names should be put in lights for all contractors to see so as they can be avoided. Watch the tables turn when they find that they can't get a job done (except by a cowboy).

I have a few names to put on the list.
Debbie Harding

I think that the FMB would be best advised to get their facts right before launching attacks. You will find that these local authorities are not 'abusing the system', because if that were so then they would be acting 'ultra vires', or illegally. The council tax legislation expects local authorities to issue completion notices and, failure to do so would open them up to criticisms of weak practice. So, I would suggest that the FMB are doing the right thing in tackling Government but, the wrong thing in complaining about local authorities, who are only doing what is expected of them!
Sean Langley

Thank goodness Jason White has seen the light or the wind as the case maybe. Perhaps if more people like Jason with a positive attitude toward "real" carbon neutral technology had a voice in their community then sustainable energy would really have a future.
Steve Wells