Five routes have been shortlisted by the government for the £5bn Trans-Pennine tunnel between Manchester and Sheffield.

As part of an updated study on the strategic and business case for the tunnel, the Department for Transport (DfT) has chosen five priority options where the tunnel could be built, of 12 possible routes.

The route shortlisting marks another step forward for the megaproject, which was given a boost by former chancellor George Osborne in the spring Budget earlier this year.

All five priority routes join the M60 east of Manchester to the M1 north of Sheffield, with four options starting at the M67.

Whatever route the tunnel takes, estimated journey times between the two cities will be cut by 30 minutes.

The study is part of the government’s next phase of road improvements, which will get underway from 2020. The current Road Investment Strategy period covers 2015 to 2020.

In the final stage of the study, due to be completed by the end of 2016, the strategic and economic cases for each option will be assessed and cost estimates provided.

A joint venture between consultants Mouchel and Hyder won the £1.3m contract from Highways England to conduct the study for the DfT in July last year. 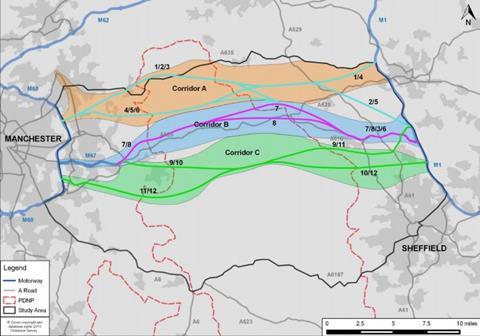