The client for two problems jobs which cost Galliford Try more than £100m denies holding any responsibility for the firm’s decision to make hundreds of job cuts.

Earlier this week the contractor said it was going to shut down its Scottish infrastructure arm, adding: “It is a matter of record that for some time our business has sustained considerable losses on two major infrastructure projects within Scotland.”

Both jobs – the Queensferry Crossing (pictured) and the Aberdeen bypass – were for Transport Scotland, the transport arm of the Scottish government.

And both jobs encountered costly delays because of adverse weather conditions – and have been the subject of heated dispute between client and contractor.

Excessive wet weather over winter 2017/18 meant Galliford Try and JV partner Balfour Beatty were only able to lay black top for ten days in a three month stint, while the Queensferry scheme was battered by high winds during which work had to be stopped. 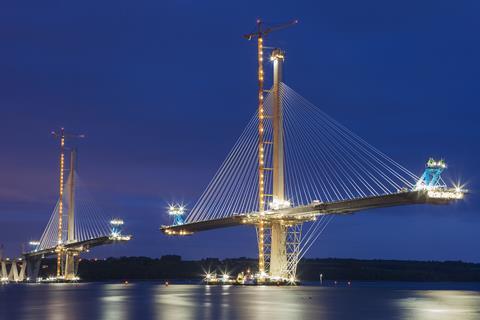 Galliford Try and Transport Scotland have already clashed in court, with the former trying to recoup costs which it says arose from circumstances outside of its control.

Commenting on the 350 job cuts at Galliford Try, a Scottish government spokesperson said: “While it would be inappropriate for us to comment on the financial aspects of Galliford Try, or any other private company, we are obviously disappointed to hear of this news.”

But he added: “We are not prepared for the public purse to pick up cost overruns incurred by contractors.”

“We understand that most Galliford Try workers on these projects had already been notified that their employment was due to come to an end, given the fact that remaining works are nearing completion.”

Legal wrangling over Queensferry, which was completed in 2017, has now ended – with Galliford Try announcing a fresh £40m loss on the scheme last month.

Negotiations between Transport Scotland and Aberdeen Roads Limited (ARL) – the JV between Galliford Try and Balfour Beatty – are ongoing following the opening of the Aberdeen bypass in February.

The Scottish government spokesperson said: “Discussions continue with ARL regarding a claim it believes it has, so far ARL has yet to substantiate this claim.”

And he added: “Our current infrastructure investment programme includes record investment in improving road and rail infrastructure, which is creating jobs, helping businesses, and supporting sustainable economic growth across Scotland.”