City Hall has said it has not yet received the application from the team behind the Tulip for London mayor Sadiq Khan to give it the green light – or call it in.

The 305m tall scheme, designed by Foster + Partners, will be built in the shadow of the practice’s Gherkin in the Square Mile which was completed by Skanska in 2004.

Skanska is construction consultant on the tourist attraction which was given the OK by the City of London’s planning authority at the beginning of the month.

A City Hall spokesperson confirmed the mayor had not yet received the application for his approval with this set to be “some weeks away”.

He added: “Once the application is referred we have 14 days in which the planners have to prepare their report and the Mayor makes a decision.”

This is known as known as stage 2 in the planning process with any calling in of the scheme called stage 3.

In this case, stage 3 would involve the mayor subjecting the scheme to further scrutiny, a public consultation and then a public hearing at which a final decision is made.

Khan said earlier this year the scheme does not comply with the London Plan, calling the design “incongruous” adding that its height was “unjustified”. City Hall also raised concerns about the pressure the loss of public realm at street level would create.

Created for the billionaire Gherkin owner Jacob J Safra, other firms working on the job include QS Alinea. 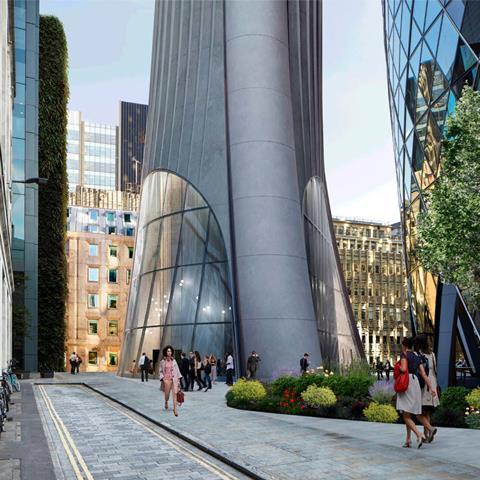