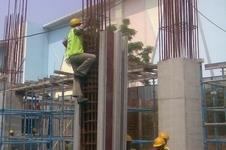 Three others injured on a housing project for labourers

Two construction workers in India were crushed to death yesterday when a wall collapsed on top of them, injuring three other labourers.

They were working on a housing project for labourers in Raia on the west coast of India when a retaining wall came crashing down on them.

One of the dead has been identified as Francis Dungdon, 35, a native of Orissa. The other has yet to be identified. Police sources informed that a labour contractor, Anand Kambli, had hired five labourers on a daily wage basis to do the plastering work at his construction site at Arlem, Raia.

The three others who escaped with injuries were rushed to the Hospicio hospital, Margao, where two are still undergoing treatment.

Margao police have registered the case as an accident. Further investigations are under way.