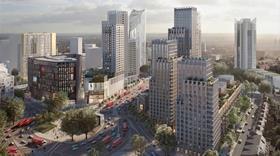 Mace and Multiplex are battling it out to land the deal to carry out the redevelopment of the Elephant & Castle shopping centre in south London, Building understands.

The pair are working up bids for the job which has been designed by Allies and Morrison for developer Delancey.

Plans, which were approved by London mayor Sadiq Khan last December after getting the green light from Southwark council last summer, also include towers of up to 35 storeys and a new shopping centre.

The entire redevelopment (pictured) is expected to take a decade to complete and Delancey has previously said will require more than 1,200 construction workers a year to finish it.

Concerns about the Delancey proposal were raised in a campaign by the local community and other protestors who said the project will force out independent traders as well as residents and users of the popular bingo hall.

But Delancey said it would deliver the project in an “inclusive and positive manner”.