Winner due on £70m job early next year

Two firms are left in the running to redevelop Alexander Stadium ahead of the 2022 Commonwealth Games being held in Birmingham.

Building understands that McLaughlin & Harvey and McLaren are now battling it out for the £70m scheme after a pitch from Buckingham, whose recent projects include the roof of the new Spurs ground, was dropped.

The pair have been building up their expertise in the sports market in recent years with Northern Irish firm McLaughlin & Harvey building a new £23m ground for rugby league side St Helens while it has worked on the redevelopment of Bristol City’s Ashton Gate ground. It also built Wilkinson Eyre’s temporary basketball arena for the 2012 Olympic Games at a cost of £7m.

McLaren is building a new training centre for Premier League title chasers Leicester City, which is set to finish next summer, and also completed the new training facilities for Tottenham Hotspur back in 2012.

The pair will find out next spring who has won the job with work to start shortly afterwards. Work is expected to finish at the end of 2021. 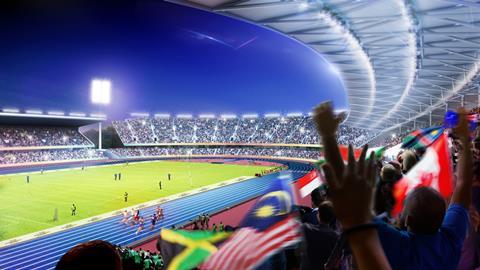 The stadium will hold 40,000 fans during the games

Arup is behind the redesign of the stadium, which will host all the games’ athletics events, plus the opening and closing ceremonies. Mace is project manager on the scheme while Arcadis is the QS.

The back straight stand, which was built in 2012 with a capacity of 5,000, will remain but the other three stands will be demolished and rebuilt.

The new stand, which will replace the three that are demolished, will increase the permanent capacity after the games to 20,000.