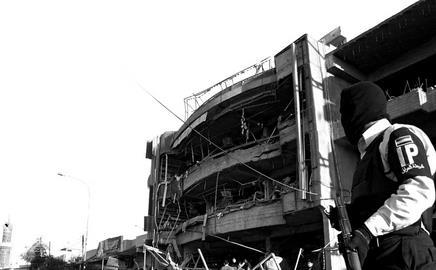 British firms are to masterplan the redevelopment of the Iraqi city of Kirkuk.

In the week that UK troops withdrew from Basra, it has emerged that architect Llewellyn Davies Yeang and engineer Pell Frischmann are to work with the US government and the Kirkuk provincial council to masterplan the war-torn northern Iraqi city.

It is thought to be the biggest role a UK firm has ever played in redeveloping an Iraqi city.

It is understood that the firms will investigate existing conditions in the city and surrounding provinces so that a 20-year development strategy can be drawn up. The project will eventually employ between 50 and 100 Iraqis and will end when Iraqi staff are able to maintain the completed masterplan.

According to the US government’s Iraq Transition Assistance Office, the project is an “extremely high priority” and will enable the US to “effectively empower the Kirkuk government”.

It is understood a contingent of British staff will live and work on a high-security US encampment outside Kirkuk until next April.

Kirkuk is a focal point for conflict between Iraqi ethnic groups

Pell Frischmann already has experience in Iraq. It assisted with the construction of prisons in Baghdad in 2004 and acted as consultant on the reconstruction of the Agricultural Building where Saddam Hussein was tried. The firm won a Queen’s award last year for its work in Iraq.

Although it was not materially affected by the 2003 invasion to the same extent as the southern Iraqi cities, Kirkuk bore the brunt of Saddam’s campaign against the northern Kurds in the eighties, and its infrastructure has since fallen into serious disrepair.

The city is also a focal point for conflict between ethnic groups, as Iraqi Kurds, Turkmens and Arabs all have historical claims to the city. It has seen increasing sectarian violence in the run-up to a referendum in November, which will decide whether the city will become part of the Iraqi Kurdistan region. US politicians have called for the vote to be delayed for fear of attracting further terrorism.

Some UK contractors have worked in Iraq since the 2003 invasion, but many have left, owing to the worsening security situation. Costain pulled out in August 2006, and Halcrow scrapped its planned Basra office in November 2005.

Pell Frischmann was unable to comment owing to the sensitive nature of the project. Llewellyn Davies Yeang was unavailable for comment.

Search for Iraq at www.building.co.uk/archive