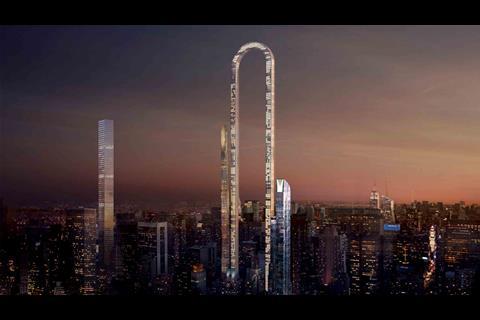 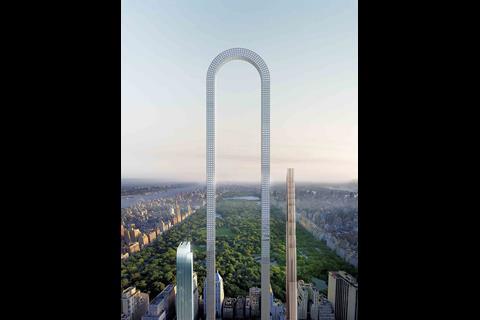 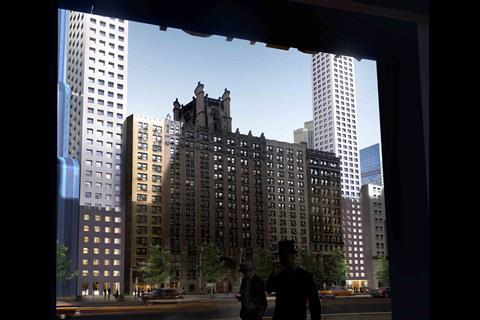 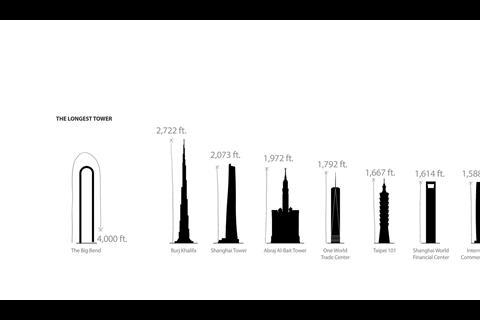 New York and Athens-based practice Oiio has conjured up a unique way of circumventing New York’s zoning laws with what has been described as the ‘longest building in the world’.

If built, the loopy 4,000ft-long skyscraper titled The Big Bend would make a significant contribution to the Big Apple’s famous skyline by seeing two twin towers curve towards each other and join in the middle, creating a single unbroken arch.

To ever get off the ground the concept design by Oiio would need to get past not just New York’s planners but also see engineers design a new, two-track type of elevator which could move horizontally

In a release the studio said: “It seems that a property’s height operates as a license for it to be expensive.

“New York city’s zoning laws have created a peculiar set of tricks trough which developers try to maximize their property’s height in order to infuse it with the prestige of a high rise structure. But what if we substituted height with length? What if our buildings were long instead of tall?

“If we manage to bend our structure instead of bending the zoning rules of New York we would be able to create one of the most prestigious buildings in Manhattan.”

Although the skyscraper designs do not show the exact height of the proposals, from an indicative drawing released by Oiio the structure would be similar in scale to China’s tallest building, the 2,073 ft tall Shanghai Tower and would certainly become the tallest skyscraper in New York, overshadowing the 1,792 ft One World Trade Centre.