The V&A’s planned outpost in east London is moving to head off a potential row with its new residential neighbours by erecting screening in the form of shrubbery to prevent gallery visitors from being able to peer into flats being built nearby.

Part of the redevelopment of the former London Olympics site, the five-storey museum (pictured) is part of the Stratford Waterfront cultural complex and is due to open in 2023.

Building understands the O’Donnell + Tuomey-designed museum is developing barriers on its terrace by planting shrubs to avoid any conflict after the Tate Modern was taken to court by owners of apartments in Neo Bankside, the upmarket residential scheme designed by Rogers Stirk Harbour + Partners, located a stone’s throw from the new extension of the world-famous gallery.

V&A bosses are keen to be seen as good neighbours and to make sure any problems with privacy and sightlines are avoided as part of the design process. One source said the planting would have a number of functions – including screening.

An LLDC spokesperson played down comparisons with the Tate Modern row but admitted: “Planting is just one of the measures that will be used to ensure that the two buildings can co-exist and their designs are not compromised.

“The residential scheme has outline permission and the final scheme will have to take full account of the V&A building in its design. Other measures to protect privacy will include angled facades and the use of casement windows on the residential blocks.”

Neo Bankside residents claimed their privacy was being breached by visitors to the museum peering into their homes from a 10th floor viewing deck.

The row escalated into a court battle which eventually saw the Tate emerge victorious earlier this year. The former Tate director Sir Nicholas Serota had suggested that people living in the Neo Bankside blocks closed their curtains to avoid being observed.

Tate Modern, which was designed by Swiss practice Herzog & de Meuron and built by Mace, has since put up signs around the observation floor requesting visitors to consider its neighbours’ privacy. 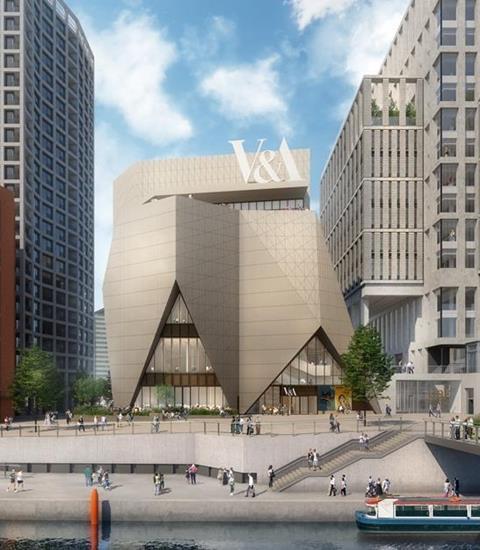 How the planned museum will look