Video: Helicopter stands in for crane on Pennine Way site 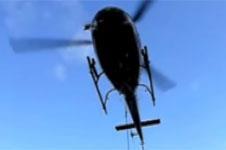 A helicopter has been used to deliver 285 tonnes of aggregate to resurface a remote section of the Pennine Way.

The aggregate was lifted in 900kg bags, one at a time, from Cemex’s High Force Quarry in Middelton-in-Teesdale to the footpath. The total operation took two and a half days.

The path lies between Low Force and High Force, Britain’s largest waterfall. It is approximately 237km north along the Pennine Way from Edale in the Derbyshire Peak District, the most southerly starting point.