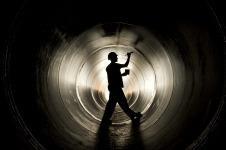 A team made up of Vinci, Morgan Est and Bachy Soletanche has pipped a Murphy and Hochtief joint venture to the £400m Lee tunnel contract, Building understands.

A contractor appointment on the London sewage scheme – the first phase of Thames Water’s £2.2bn Thames Tideway project – was not expected until the start of 2010, following delays to the procurement process earlier this year.

But sources say the trio has been given the unofficial nod following meetings with the client last month, and contracts will most likely be signed in January. A source close to the scheme said: “The contract may not be signed until the new year but the Vinci team has won it.”

The 7km tunnel will run between Abbey Mills pumping station and the Beckton sewage treatment works in east London. It is one of two channels to be built by Thames Water to cut the level of untreated waste overflowing from London’s Victorian sewers into the Thames and its tributary, the Lee. The work is required to bring the UK up to the standard required by the European Urban Waste Water Treatment Directive.

Construction was originally scheduled to start in January but delays over the summer pushed the scheme back. Work on site is now due to start in April at the earliest.

The news comes the month after publication of Ofwat’s five-year business plan, which earmarked £22bn for capital spending in the water sector and highlighted the increasing importance of infrastructure work for contractors and engineers in the UK.

Vinci and Morgan Est are also bidding together for 21km of tunnels under central London as part of the £16bn Crossrail link.