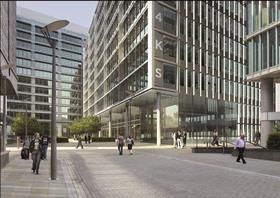 Wates has been given the green light to start work on British Land’s £80m Paddington Central development, 4 Kingdom Street.

The contractor was awarded the pre-construction contract for the new 146,000 sq ft office building in November.

British Land has today confirmed that work is underway on site.

Practical completion is expected in early 2017.

The project is the first phase of the £180m development of 4 and 5 Kingdom Street. This is part of a wider scheme next to Paddington Station being undertaken by British Land which has a total budget of £470m.

The developer acquired the Paddington Central campus in July 2013, and appointed architect Allies and Morrison to review and update the design of 4 Kingdom Street, which was originally granted planning consent in 2010.

In 2014, Westminster City Council approved changes to the scheme. The redesigned nine storey building will have typical floor plates of 15,000 sq ft, with each floor having a large corner terrace and a glass pod designed as a creative meeting space.

The core of the building has been relocated to maximise space and efficiency, creating more flexible floor plates. The development includes a communal roof terrace.

Robert Samuel, head of office development at British Land, said: “We are excited to be starting our development plans at Paddington Central, and are pleased with the enhanced design of 4 Kingdom Street.”