Contracts worth £280m saw firm take the lead in December, when overall work dropped in value

Wates topped the league table of top 10 contractors last month according to data from Barbour ABI.

The firm, recently in the headlines thanks to the CBE awarded in the Queen’s New Year Honours to deputy chairman James Wates, achieved the number one position in the league table of top performers thanks to 18 contracts worth a combined £280m.

These included a £69m housing PFI scheme for Kirklees council, a £30m contract to build the new Dixons Allerton Academy in Bradford and a £19m scheme to redevelop London’s Royal Chelsea Hospital.

Second place in the league table went to Kier, ahead of Bam Nuttall in third place and Vinci Construction in fourth. Kier won £230m worth of work in total through 52 contracts. Balfour Beatty, however, which was ranked number one in the league table last October fell further from eighth place in November to be placed outside the top 10 in December at position 20.

Overall work for the top 10 contractors dropped in value from £1.37bn in November to £1.2bn last month - a figure still well ahead of the £805m achieved by the top 10 in October and £915m in September.

Meanwhile, the value of contracts awarded in December according to the Construction Products Association and Barbour ABI index rose 6% to 122 from 115 in November.

The index, adjusted for inflation, measures the value of contracts under £250m awarded in the construction sector and works from a benchmark of 100 points in January 2010.

However, the index for all projects including those of above £250m remained at November’s low point of 84 points - a possible indicator of the financial sector’s reluctance to invest in the largest schemes in the current economic climate. 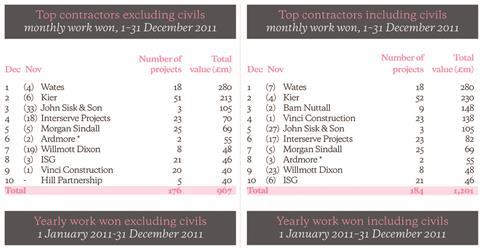