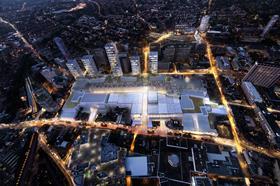 The deal follows hot on the heels of UK-based shopping centre owners Hammerson and Intu agreeing a £3.6bn tie-up earlier this month.

The merger will create a £54bn global retail property empire with 104 prime assets across 13 countries, including Westfield’s two London shopping centres in White City and Stratford.

The combined firms will also have a £10.8bn development pipeline, which includes Westfield’s joint venture scheme with Hammerson for a £1.4bn revamp of Croydon’s Whitgift centre (pictured) that got planning approval last month.

Following the deal, Unibail-Rodamco, will have two head offices in Paris and Schiphol in The Netherlands, along with two regional headquarters in Los Angeles and London.

Westfield chairman Sir Frank Lowy (pictured), who was chief executive of the company for 50 years before passing the role onto his two sons in 2011, said the sale of the firm was the “culmination of the strategic journey Westfield has been on since its 2014 restructure”.He and both his sons are to retire from Westfield.

Christophe Cuvillier, chairman and chief executive of Unibail-Rodamco, said: “It [Westfield] adds a number of new attractive retail markets in London and the wealthiest catchment areas in the United States.

“We believe that this transaction represents a compelling opportunity for both companies to realize benefits not available to each company on a standalone basis, and creates a strong and attractive platform for future growth.