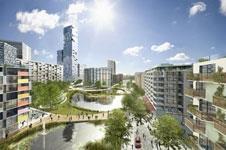 The £4bn Stratford City development has been thrown into confusion by the sudden departure of the Westfield construction director who was running the project.

It is understood that Terry Starr left Westfield two weeks ago after a disagreement with the firm’s management. Westfield is now believed to be considering parachuting in John Roberts, the project director on its £1.6bn, White City retail development in west London.

Starr had been running Stratford City, which borders the Olympic park site, for almost a year.

Starr joined Westfield last February from Sir Robert McAlpine, where he rose to prominence for managing its £2bn Colchester Garrison PFI, the first phase of which was completed in 2006. He had been at Sir Robert McAlpine for just over three years.

A source close to the Stratford City project said: “As I understand it Starr left Westfield after a disagreement on a point of principle. It involved his working relationship with his superiors.”

The source added that Starr was now “taking time to consider his future”.

The three stakeholders in Stratford City regeneration are Westfield, London & Continental Railways and the Olympic Delivery Authority (ODA). The ODA is involved because the site includes the Olympic village, which is being developed by Lend Lease.

The scheme has more than 5,300 homes and 1.25 million ft2 of retail, leisure, hotel and office space and community facilities.

About 3,000 of the homes will be used for the Olympic village during the 2012 Games.

The project is expected to be finished by 2011.

Richard McCaffrey, the chief operating officer of White Young Green (WYG), has resigned unexpectedly after seven years at the consultancy.

WYG said McCaffrey left the board and the firm “by mutual agreement with immediate effect”. It refused to comment further on the departure.

More on Stratford City at www.building.co.uk/2012