Wilkinson Eyre opens Sydney office on the back of Barangaroo work

Wilkinson Eyre is opening an office in Sydney on the back of its $1.5bn One Barangaroo project in Sydney.

The Stirling prize-winning practice has already picked up other work in Australia and is hoping a permanent presence in the country will allow it to leverage the publicity surrounding Barangaroo.

The 275m tower, a Crown hotel and casino topped by flats beside Darling Harbour, is one of Australia’s most expensive buildings and Sydney’s tallest.

The practice’s founding director Chris Wilkinson has described learning from their experience in Singapore after their Gardens by the Bay project completed and didn’t generate further work despite attracting 50 million visitors. He put that down to the fact that their team was based in the client’s office and when the job ended they just packed up and came home.

“We learnt a lesson that you have to be there, really: take advantage of it,” he told the Australian Financial Review. “And it’ll be the same at Barangaroo. People will say ‘that’s a nice building’ but they won’t say ‘who did it, who’s the architect?’ – so we feel we need to be around.”

Wilkinson said Stuart Dow, an Australian who has been with the practice for several years, had relocated back to the country to head up the new studio and would be followed by colleagues from London as those projects gear up.

He said: “While One Barangaroo was designed from London, we have now committed to an office in Sydney to field work there and across the country.

“As well as further projects with Crown Resorts, we are undertaking the Brisbane Park Vision, converting a former golf course into a public park for the city, and are engaged with prospective clients on several sites countrywide.”

Sectors they are looking at include education, cultural, commercial and infrastructure, with metro stations and more towers on their wish list.

Wilkinson Eyre already has offices in Paris and Hong Kong as well as a presence in North America.

One Barangaroo’s neighbours include the completed International Towers by Rogers Stirk Harbour & Partners and the under-construction One Sydney Harbour by Renzo Piano Building Workshop.

Construction challenges include the installation of 10,000 glass panels, of which 80% needed to be sized individually. Some 237,888 tonnes of concrete and 20,000 tonnes of steel have been needed to complete the structure. 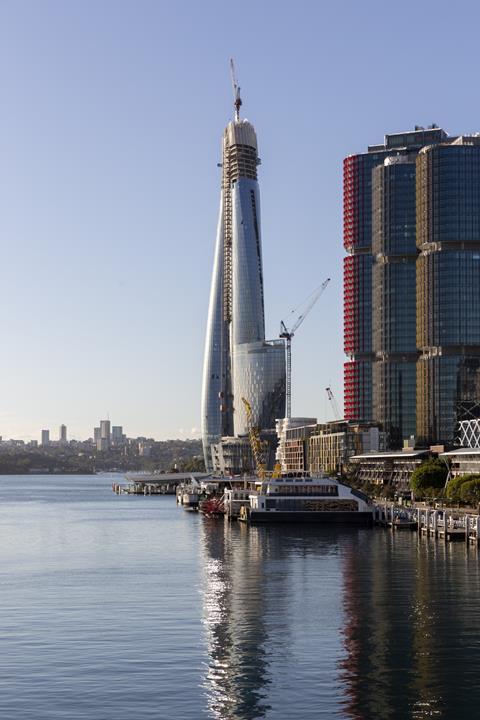