From today, working from home will start again for the first time since July.

Boris Johnson took to the airwaves yesterday evening to warn of an approaching “tidal wave” of Omicron, the new variant of covid which has taken the jingle out of Christmas plans across the country and looks set to send parts of the economy into another form of lockdown.

The new restrictions come at an unfortunate time for the UK office sector, which has been staging a recovery in recent months after being badly hit during the first series of lockdowns. 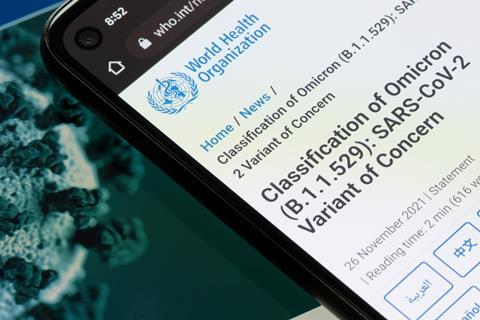 “The City has clearly got its buzz back,” Alinea partner Iain Parker said. “Not a lot has happened in the way of new starts over the last 12 months but there is certainly a lot of stuff that’s brewing, that’s bubbling, that’s building momentum.”

But the new restrictions, despite Johnson pointedly describing them as “guidance” when announcing the measures last week, send a message that office working is still at the mercy of the virus.

What will concern developers is the precedent that has been set. There are likely to be many more variants in future and if the first response of officials is to tell people to work from home, it seems more likely that it will happen again.

So could it dent the confidence of investors of office schemes? “Clearly, we were getting some momentum so it’s annoying”, said Parker. But he said he sees it as more of an “aggravation” than a “fundamental setback”. He added that not a single client had showed the slightest hesitancy since the appearance of Omicron a few weeks ago about schemes in the pipeline. “The mood is the same.”

Gleeds chairman Richard Steer is less relaxed: “Those on short term leases, looking at their floorspace requirements over the next two years or so may be looking to reconfigure or move if they think the government intends to adopt the start-stop approach to every incoming variant.”

Last month’s Deloitte survey found more than a third of developers expected working from home to have no impact on leasing demand, three times more than the 12% reported 12 months ago. “Now I wonder whether there will be a reversal of those numbers since the government has stepped in with restrictions once again,” Steer said, adding: “Long-term, surely, there comes a point when we will need to live with these variants and adopt a business as usual approach, taking our jabs and getting on with life?”

For others, the new round of restrictions is a reminder of how office space needs to change, rather than a blow to the market.

Glenigan economics director Allan Wilen said: “The emergence of the new variant underlines the need for flexible office space that can safely accommodate changing working practises.” He said that in the near term, activity in the sector will continue to be driven by refurbishment projects as landlords adapt their premises to hybrid working.

He added that while the Omicron measures may be “bad for developers’ nerves” they are unlikely to “significantly impact the recovery in office construction activity over the next two years”.

The danger of the new variant is not yet fully known and the first hospital patients were only admitted over the weekend. Case numbers are also reported to be declining in South Africa, the country where the variant was first detected.

In the meantime, office workers know the drill. Incoming ISG chief executive Matt Blowers last week told the 400 staff who can work at the firm’s Aldgate headquarters on the edge of the City to work from home from today. The office has been no more than 50% full since lockdown measures were eased over the summer and Blowers added: “We sent a note out, reinforcing the measures making sure we’re abiding by them. If you don’t have to come in, work from home. We’ll follow the government advice as we always have.”

He added: “We are living with it. The reaction is very different. People are much more respectful of it, understand it, they’re going to live with it.”

Blowers admitted, that like most firms, working from home had caused problems. “We lost the ability of bringing people together. Did our culture suffer a bit? Yes, probably. We’ve worked really hard to try and get that back. We made massive efforts. We had lots of events to try and get people back together again which has been good.”

Last week publisher Future Publishing made headlines when it was reported that the company had sent an email to its 1,500 staff in the UK to carry on coming into work.

The company said that working from home affected “business performance, creativity and teamwork” and “ideally” wanted staff in at least two days a week from today as staff “benefit from collaboration”.

After the news emerged, the firm reversed its advice and said staff were under “no pressure” to come into the office.

But its original email will chime with many. No company has publicly said working from home is better for teamwork and collaboration.

As one of fit-out’s big two, Blowers says ISG has seen around £600m worth of work come through its doors in London alone. “We don’t see any let-up, right now,” he added. Last month, the other big fit-out business, Morgan Sindall, said its order book was at a record £944m at the end of September. Initial worries about the future of the office right at the start of the pandemic have simply not translated into nosediving workloads and order books.

But for the office sector, the future depends on how long people are prepared to live with it. The more entrenched working from home becomes, the less likely it is that office occupancy will return to pre-pandemic levels.

Deloitte real estate director Mike Cracknell said last month that the recent bounce of new speculative developments being brought forward reflects developers’ “ability to look through the short-term effects of the pandemic to a future where occupancy and demand will rebound”. Whether this mood will continue could depend on how dangerous Omicron, and future variants which follow it, will prove to be.