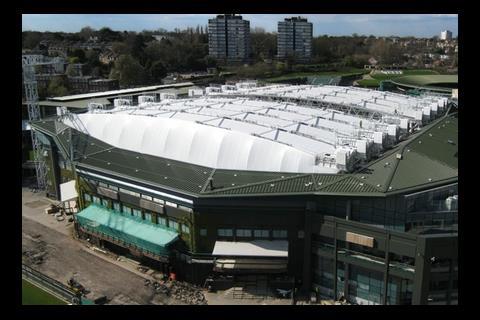 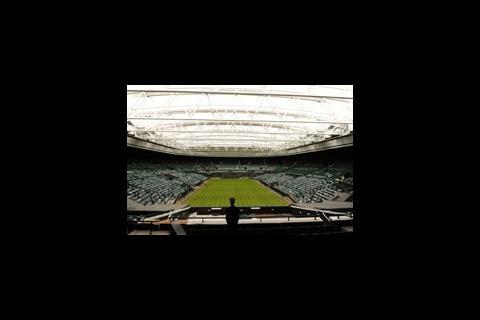 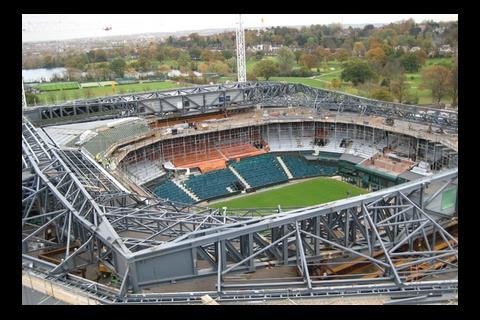 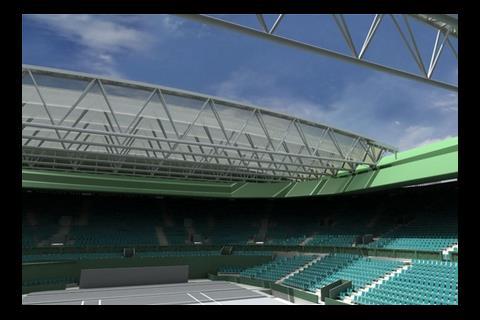 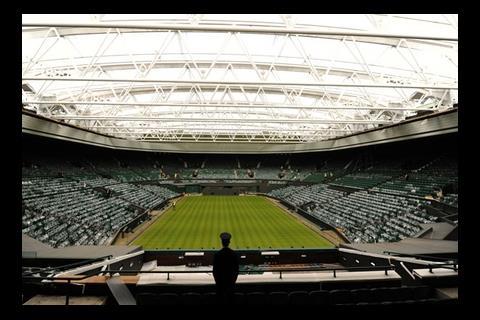 The All England Club in Wimbledon has unveiled the 3,000-tonne retractable roof that will keep Centre Court players and spectators dry at this year’s tennis championships.

The concertina-style roof, designed by HOK Sport with structural engineering services by Capita Symonds, can be closed in ten minutes. The All England Club claims that play on Centre Court will now be disrupted by no more than 30 minutes in the event of rain.

As well as a roof, the club has had to install a sophisticated air management system to keep the covered arena from overheating.

The All England Club does not disclose budgetary information on any of its venues, but the redevelopment of centre court is likely to be in the tens of millions.

Ian Ritchie, the chief executive of the All England Club, said: “The new Centre Court roof project has been a sophisticated engineering feat. Much of the testing is complete and we are now making final adjustments ahead of the Centre Court Celebration event on 17 May.”

The test event on 17 May will feature a mixed doubles match between Andre Agassi, Steffi Graf, Tim Henman and Kim Clijsters.

8: Litres per second of fresh air per person pumped into the bowl to manage the environment
9: Chiller units required to cool the air
10: Minutes (maximum) that the roof takes to close
10: Trusses holding up the roof
16: Metres - height of the roof above the court surface
30: Minutes – maximum time expected before play can start/continue after the roof is closed and the internal environment is controlled and stabilised
43: Miles per hour - wind speed up to which the roof can be deployed/retracted
77: Metres - the span of the moving roof trusses (width of football pitch = 68m)
70: Tonnes - weight of each of the 10 trusses without extra parts
100: Tonnes - weight of each of the 10 trusses with all extras – eg motors, locking arms
100: Percent of the roof’s fabric which is recyclable
214: MM per second - maximum speed of truss deployment
1,200: Extra seats installed in 2008
3,000: Tonnes - combined weight (both fixed and moving) of the roof
5,200: Square metres, area of retractable roof when fully deployed
7,500: Wimbledon umbrellas, needed to cover the same area as the retractable roof
15,000: Maximum spectator capacity
143,000: Litres per second – total amount of conditioned air that the air-management system supplies to the bowl
290 million: Tennis balls – number that could fit in the Centre Court with the roof closed