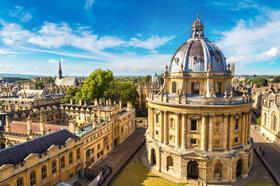 Morgan Sindall is the only firm to secure a place on all three lots of the university’s Capital Projects Partner Framework.

Wates and Bam are the other two firms to land roles on the lot for projects worth more than £20m, while Willmott Dixon and Midas join Morgan Sindall on the middle value lot – which covers projects worth between £5m and £20m.

Local firms Kingerlee and EW Beard claimed the other two spots on the smallest lot, which covers projects worth up to £5m.

Along with the seven firms on the main framework, another four landed places as reserves, including Sir Robert McAlpine and Laing O’Rourke on the highest value lot.

The university is expecting to award £150m of construction work every year throughout the life of the decade-long framework.

Projects will include a mixture of new developments and refurbishment of some of its existing 237 buildings. A quarter of these are listed assets, with a third built before 1840.

The first tranche of work under the framework is expected to be tendered shortly.