Experts pioneering the widespread use of structural timber have warned that government plans to further tighten the ban on combustible material on the external walls of buildings will further damage the sector.

They said the UK risked losing its leadership position in the use of materials such as cross-laminated timber (CLT) and glulam, which fall foul of the ban but have a much lower carbon footprint than traditional build materials such as concrete, steel and masonry. 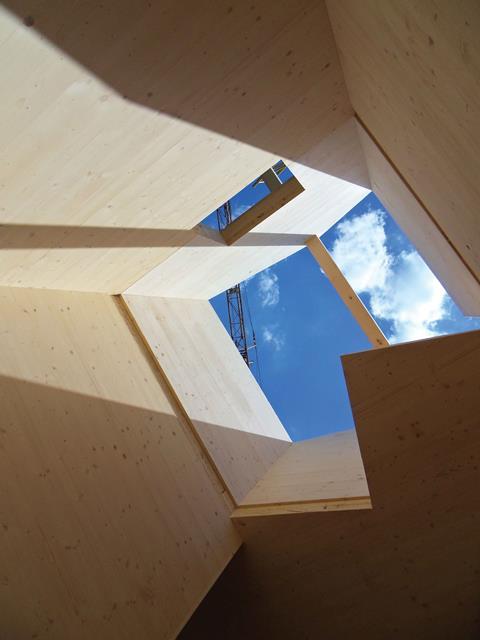 The concerns come after the government earlier this month consulted on plans to reduce the height at which the ban comes into effect from 18m to 11m, potentially affecting a far greater number of residential buildings. It introduced the ban in December last year as part of measures to address fire safety in the wake of the Grenfell Tower tragedy.

Nic Crawley, associate at architect firm AHMM, who has advised on a number of CLT buildings, said the current ban had already led one client to ditch CLT mid-design stage and return to traditional materials.

He said: “If this is adopted following consultation … the negative ‘side effects’ [of the existing ban] would certainly be compounded.”

Crawley said that while many clients were still enquiring about using CLT, the ban had led AHMM to specify other forms of construction and materials when it previously would have recommended structural timber.

Anthony Thistleton, co-founder of “timber-first” architect Waugh Thistleton, said the UK was risking the loss of its global leadership position in sustainable building materials such as CLT and glulam.

While he said his practice was still receiving many orders, particularly for commercial buildings unaffected by the regulation, the ban had nevertheless impacted the market. “My fear is the UK is giving up its leadership position on this. Just when the UK’s prominence was being established, we’ve had this regulation constraining the sector.”

Thistleton said the ban should be amended to allow fully-tested external wall make-ups containing combustible material to be permitted if proved to be safe, while AHMM’s Crawley said the government should distinguish between structural wall parts and the cladding on the outside.

The concerns come a week after the decision by a modular housing pioneer, housing association Swan, to ditch CLT for its new apartment product because of the so-called “combustibles ban”.

Swan, which set up a 400-homes a year modular housebuilding factory in 2017 to deliver a 3,500-home development pipeline, said the decision to switch to steel followed the government’s ban on combustible materials in the external walls of homes more than 18m in height.

Swan’s decision to drop CLT for its pipeline of apartments – it will carry on using the technology for low-rise houses – comes after similar decisions by developers L&G and Lendlease.