Turnover at architect jumps on back of booming Asia market

Pre-tax profit and turnover leapt at Zaha Hadid Architects in the first year of the pandemic, along with directors’ pay, its latest accounts show.

Six directors took home £3.29m between them, a rise of more than 60%. They were principal Patrik Schumacher, chief executive Mouzhan Majidi, Jim Heverin, who designed the London Olympic Aquatics Centre, Gianluca Racana, Charles Walker, and Charlotte Phillips who has since resigned. 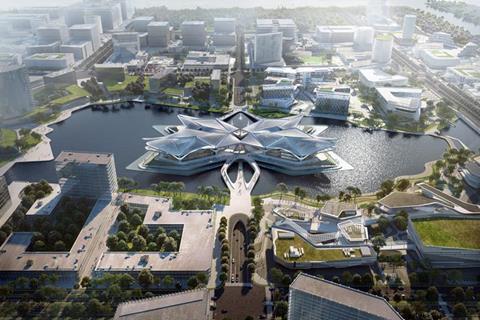 The centre at Zhuhai will include a 1,200-seat Grand Theatre, science centre and an art museum.

The pay packet for the highest-paid director, thought to be Schumacher, rose to £1.5m, an increase of more than 130%.

But it said at the time that the Chinese market, where it is working on the Zhuhai Jinwan Civic Art Centre, remained so buoyant it planned to recruit staff to manage its growing workloads there.

The financial outcome of this can now be seen in its accounts which reveal that Asia was the biggest contributor to its bottom line by far, growing from £25m to £38.5m during the period. North America and the Middle East both showed modest growth while every other region shrank, including the UK and Europe.

In a report accompanying the accounts, which were filed three days before Christmas, Schumacher said the practice was “an industry leader with women comprising 45% of architects at ZHA where the London team of 50 different nationalities includes more than 30% with black, Asian and minority ethnic backgrounds”.

Last summer, the firm said it was leaving its office in Clerkenwell’s Bowling Green Lane after nearly four decades because the pandemic has forced a rethink of how the practice operates.

It said the classroom accommodation of the grade II-listed Victorian former school it has occupied since the early 1980s was too inflexible for the needs of the practice as it plans for post-covid operations. It is moving to an address in nearby Goswell Road.