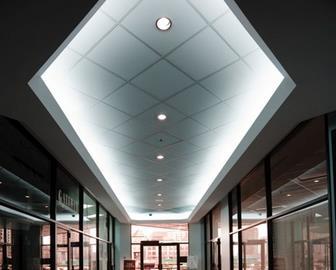 Commercial premises must now not only look good and be cost-effective to run, but their effect on the environment must also be taken into consideration. This is part of conveying an acceptable corporate image.

A project by Canadian lighting specialist Burton Lighting Network, using Marl’s Titan LED light engines, demonstrated how the latest technologies can help companies to improve performance in all of these aspects.

The firm installed 30 LED downlights as part of an upgrade and refurbishment at the offices of real estate company Morguard in Mississauga, Ontario.

Burton replaced a mix of 90W and 120W PAR lamps. Thanks to higher efficiency and lower operating voltages, LED light sources consume about a third of the power for a comparable light output. In a large office or an entire building this produces an appreciable reduction in the watts consumed.

There have been some practical barriers to converting from traditional light sources. Most LED light engines require new wiring to connect multiple units to a transformer across a 24V DC link. Barry Burton has overcome this by designing an LED downlight for direct connection to a PAR30-type fixture.

By including a small 120VAC to 24VDC converter within the luminaire, he has created a low-power LED lighting solution that can be used within a standard mains-lighting circuit.

This allows office refurbishments to use LED lighting without new wiring practices or inspection codes. In addition, LED luminaires can be retrofitted easily as part of a lighting-only upgrade without rewiring.

Burton’s LED downlight consumes only 35W. From a ceiling height of 10ft, it produces a beam of 4.5ft diameter and 28 foot-candles luminous flux at its centre. This is comparable to the output of a PAR30 incandescent lamp, allowing like-for-like replacement to deliver similar or better lighting.

The Titan’s low power consumption and high thermal efficiency not only produce energy savings but have assisted with the thermal design of the luminaire.

Barry Burton says: “The thermal performance of the Titan allowed me to create an effective heatsink within the PAR30 form and thereby design for a field life longer than 11 years.”

This saves on the labour and administrative costs of routine replacement of failed bulbs, as well the cost of safe disposal of fluorescent tubes.

Burton believes that with the annual power savings and the reduction in maintenance costs, Morguard will save about £1200 a year by converting 30 lamps from incandescent units to the Titan-based PAR30-compatible LEDs.

The enhanced controllability of the LED downlights produces plentiful illumination throughout the offices and the use of cool white LED enhances the natural daylight in the front lobby.

“The results show how far and how quickly LED lighting technology is progressing,” Burton says.