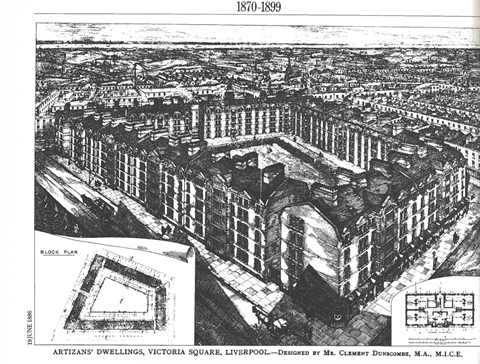 A place for everyone and everyone in their place

As we look at the Social Value Act and consider whether it will encourage firms to be more sustainable and ethical, Building looks back to Victorian times when Britain’s industrial bosses had little thought of preserving the planet and the two-day weekend was not commonplace.

The deserving poor had to rely on the generosity of rich philanthropists, so the first working class homes with bathrooms were not built until 1888, when Viscount Leverhulme had Port Sunlight, Merseyside, constructed for workers at his soap factory.

It became clear, however, that there was a need for the state to provide housing. The Act for Facilitating the Improvement of the Dwellings of the Working Classes in Large Towns was passed in 1875, much to the jubilation of Building’s predecessor The Builder, which had long campaigned for such reforms.

An early example of council housing were blocks of “artisan’s dwellings” in Victoria Square, Liverpool (pictured), which were unwillingly built by the local authority after it became clear no private companies were interested in building housing “suitable for the poorer classes”.