The restructuring of the Palace of Westminster is hit by delays, cost overruns and controversy 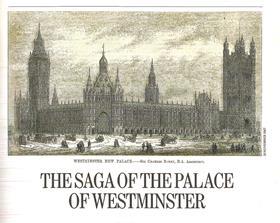 The saga of the Palace of Westminster

Penny for the Guy? With Bonfire Night celebrations upon us it seemed appropriate to delve into the history of the building that Mr Fawkes tried his upmost to send skyward. If we travel to 1850 - some 245 years after Guy’s dastardly scheming - we’ll find another fella who probably fancied leveling the Houses of Parliament in his darker moments.

Architect Charles Barry won the prestigious design competition to restructure the Palace of Westminster in 1836. But what followed was a 32-year construction period plagued by controversy, huge delays, cost overruns, strikes and acrimonious battles. All of which resulted with Barry being pilloried by MPs and the public.

Building - then The Builder - visited the House of Commons on 4 February 1850 to report on the delays: “Here and there you may see other pairs of men amusing themselves pleasantly by altering a panel or putting up a moulding, - evidently set to it to prevent them from suffering from ennui, and avoid the necessity of discharging them altogether. Our readers who understand these things will laugh when we tell them, that the whole number of joiners now employed on the building is thirty;- four flies to eat up an elephant: they perhaps may get through the job if they live long enough, but it will be a weary while first.”