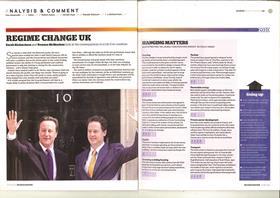 With a consideration of how well the current government, as its innings draws to a close, has delivered on its promises for the construction industry taking centre stage in this week’s issue (pages 20-25), it seems fitting to revisit the birth of the coalition. On 14 May 2010, having witnessed David Cameron and Nick Clegg announce their joined forces in the Downing Street rose garden, Building predicted what this amalgamated government could mean on eight key construction policy areas - rating each one’s prospects with a score of one to five (depicted with nooses). Fearing the worst for private sector development - which scored four nooses - its analysis read: “The third runway at Heathrow was axed within hours of the new regime seizing power. Nor is Crossrail safe. Vince Cable has said the project is ‘not a key priority’, and the Tories could scale back, extend or freeze it. Hugh Blackwood, chief executive of Scott Wilson, says: ‘The Tories may say that now they’ve seen the books they’re changing their view.’ The first phase completes in the middle of next year, which might be a convenient point to pause the project. High-speed rail is backed by both parties and so has a good chance of being approved.”